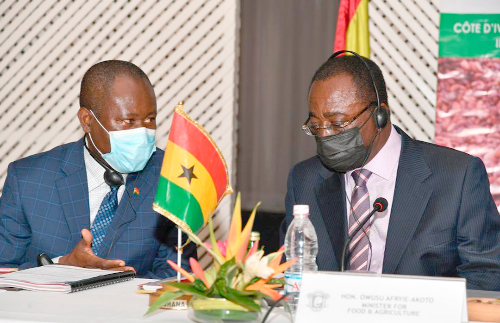 In pre-independent Africa, Ghana was a torchbearer of political freedom. It spearheaded the continent's emancipation agenda, fueled a reawakening for self-governance across the continent and went on to become the first in sub-Saharan Africa (SSA) to break free from the shackles of colonialism.

Now, the country wants to do more for the continent. It is leading efforts to achieve economic freedom for the more than 1.2 billion people in Africa.

In recent times, Ghana has played, and sometimes led, significant roles in the establishment and operationalisation of critical continental and regional bodies to pool resources and ideas to boost economic growth, empower Africans economically and reduce reliance on Western countries.

The most recent one is the national effort that crystallised with similar ones to make the Africa Continental Free Trade Area (AfCFTA) possible, leading to Accra becoming the trading headquarters of Africa.

In the cocoa sector too, something monumental has been taking shape and Accra is now set to become the cocoa headquarters of the continent and by extension, the world.

As the world's only producer of premium cocoa and the second top grower of the bean, Ghana, and its western neighbour, Cote d'Ivoire, supply more than 60 per cent of the world’s cocoa but receive less than six per cent of the value it generates.

Although Ghana produced about 970,000 tons of cocoa beans in the 2016/17 season (equivalent to 20.5 per cent of global output), the country earned just a little above $2.7 billion from the sector in that year, compared to about $22 billion grossed by chocolate giants in the United States of America in the same period.

This hurting disparity in the sector deepens poverty and threatens the sustainability of the sector. Although almost all stakeholders admit the risk, not many were willing to commit to an enduring solution.

Around 2017, Ghana and Cote d’Ivoire moved from talk to action. In March 2018, President Nana Addo Dankwa Akufo-Addo and his Ivorian counterpart, President Alassane Ouattara, signed what has now become known as the ‘Abidjan Declaration,’ committing their two countries into a mutual agreement to advance the cause of their respective cocoa sectors.

That strategic partnership set off series of meetings in Accra and Abidjan, led by the Ghana Cocoa Board (COCOBOD) and its counterpart agency, the Le Council du Caffe-Cacao (CCC) of Cote d’Ivoire.

The maneuverings have since yielded historic successes, key among them being the procurement of a $1.2 billion loan from the Africa Development Bank (AfDB) to improve their respective cocoa sectors, the introduction of a living income differential (LID) for cocoa farmers and the institutionalisation of the Ghana-Cote d'Ivoire Cocoa Initiative to champion the welfare of the world's largest cocoa farmers.

The ‘Abidjan Declaration’ has also birthed an Accra Charter, a Steering Committee, chaired by the Minister of Food and Agriculture, Dr Owusu Afriyie Akoto, to operationalise the Charter, and a secretariat to be headquartered in Accra.

In December last year, Ghana’s Parliament ratified as well as granted diplomatic status to the headquarters agreement, paving the way for a Cote d’Ivoire-appointed Executive Secretary and staff from both countries to assume office.

Ahead of a formal ratification by both Presidents, the two countries are now set to formally receive the head office agreement from Ghana at a signing ceremony to come off on Thursday, August 5 in Accra.

The agreement will legally and formally make Accra the cocoa headquarters of Africa (and later, the world) by transferring the building from Ghana through the Minister of Foreign Affairs, Mrs Shirley Ayorkor Botchway, to the Steering Committee Chairman of the Ghana-Cote d’Ivoire Initiative, Dr Akoto.

This is momentous. It is not just historic but indelible, especially for two neighbours that have long suffered similar disparities yet failed to exploit their strength in cocoa production to protect and enhance the incomes of their farmers.

As President Akufo-Addo said in 2019, the time had come for Ghana and Cote d’Ivoire to stop being victims or pawns of the global cocoa industry that was dependent on the work of their farmers.

And if the cocoa sector stakeholders, comprising chocolate producers and cocoa traders indeed mean well for the industry and its farmers, this is the best time to join hands in helping to alleviate poverty through improved prices to address the challenges facing the farmers.

While today’s signing ceremony is significant, it is only the beginning of a tough journey ahead. The world trade order is unjust to individual players and corporations that lack fortitude cannot withstand the schemes.

The two countries will have to walk the tight rope of holding each other by the hand, speaking with one clear voice and making good use of their sway in numbers, supplies and the striking similarities in how their cocoa sectors are regulated.

The decision to use only staff of the two regulatory bodies to execute the initiative is laudable and should be guarded jealously.

The circumstances that led to the collapse of the Alliance for Cocoa Producing Countries (COPAL) present good lessons, especially as they aim to expand the cooperation to include other African cocoa producers.

For now though, Accra is enthusiastic about hosting the headquarters of the world’s two largest cocoa producers. It should mark the beginning of the creation of a ‘COPEC’ – the cocoa sector version of the global oil cartel that comprises 14 major crude oil producers whose actions dictate the price of the commodity.