Handwashing not for COVID-19 prevention only; Public health nurse 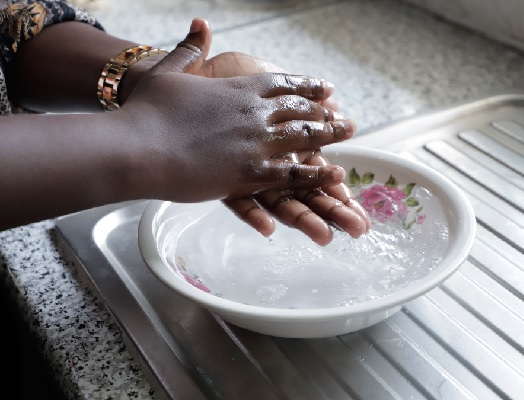 Washing hands with soap under running water may seem a simple exercise but according him, it is one of the most effective ways of preventing infections.

Mr Kpobi who works at the Department of Medicine, Korle Bu Teaching Hospital in Accra, said proper hand hygiene could lead to the reduction of respiratory infections such as cough and cold, typhoid, conjunctivitis, cholera and other diarrheal illnesses.

“The hand is the only part of the body that reaches all parts of the body and it’s used for many activities. Through these activities, the hands pick many germs which are transfered to other parts of the body. Frequent handwashing therefore reduces the risk of infections, subsequently reducing the frequency of some sicknesses,” he said.

Reduction in infections
Hand washing became popular across the world following the outbreak of coronavirus after it was identified as one of the ways to contain the spread of the virus.

He said although his unit was yet to publish the figures, there had been a reduction in the number of certain common respiratory and eye infections.

Mr Kpobi said in the past, it was mainly health workers who were conscious of hand hygiene but these days hand washing stations were common, and people who did not have access to soap and water used sanitisers regularly.

“I have realised that hand hygiene has directly affected the number of infections recorded. Most of these infections occur after germs or micro organisms picked from the floor and other surfaces are introduced to the nose, mouth, eyes and cuts on other parts of the body. Now that people are washing their hands more frequently and using sanitisers regularly, the cases are reducing”.

Proper hand hygiene
When Ghana started recording an increase in the number of COVID-19 cases, handwashing stations became mandatory and were cited in front of offices, schools, churches, markets and other public spaces.

It was mandatory to wash the hands before entry, however, today, only a few of these facilities, including hospitals, have functioning handwashing stations.

In most of these places, the Veronica Buckets are still stationed outside but they are either empty or without soap or even both.

A few facilities have automatic sanitiser dispensers while in other places, the role of the security personnel include dispensing sanitiser to clients before they enter.

There are also many facilities that have neither a functioning wash station or sanitiser.

Mr Kpobi said although sanitisers were also effective against the spread of certain infections, including COVID-19, the best way to maintain proper hand hygiene was through washing hands with soap under running water for at least 40 seconds.

“Washing hands in a basin with standing water is not advisable as the germs you want to wash off stay in the bowl. It is even more dangerous when another person uses the same water to wash his or her hand, you only end up spreading germs instead of washing the hands.”

He said even for health workers who use gloves, they washed their hands with soap under running water before and after wearing a glove.

This practice is to prevent them from transferring or catching infections.

The day serves as a yearly reminder that handwashing with soap and water is one of the best steps we can take to avoid getting sick and spreading germs to others.

The observance was established by the Global Handwashing Partnership in 2008. This year’s theme, “Our Future is at Hand — Let’s Move Forward Together,” calls for coordinated action as we actively work towards universal hand hygiene.

Campaign on hand hygiene
Mr Kpobi called on policy makers not to relent on efforts to provide hand washing stations in public places.

“We shouldn’t let down our guard in championing the campaign and creating of awareness. We should be the role models and practice what we preach,” he added.