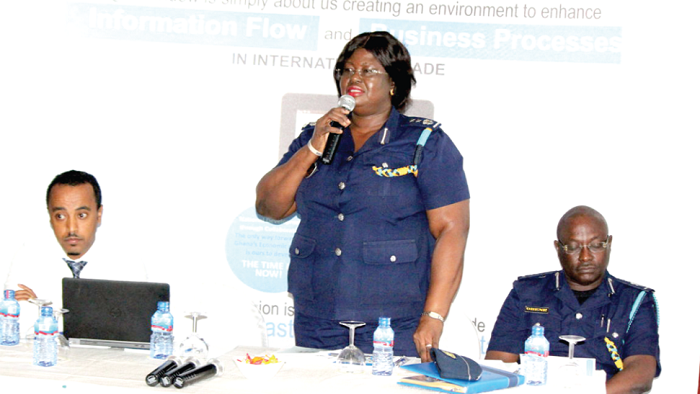 To this end, the company will begin rolling out an electronic manifest (eManifest) platform next month, as part of the implementation of the GNSW project to enable customs officials of the Ghana Revenue Authority (GRA) to access advance information on all cargo arriving in the country by air in real time.

This is a departure from the existing practice where customs officials have to shuttle from one airline operator to the other in search of such information.
eManifest, according to officials of West Blue, will improve cross-border commercial processes. When fully implemented, eManifest will require carriers and freight forwarders to send advance commercial information about their shipments electronically to the GRA.

The collection and risk assessment of pre-arrival data will improve the GRA's ability to detect high-risk shipments before they arrive at the border. At the same time, low-risk, legitimate trade will be able to cross the border more efficiently.

eManifest will make the country’s border processes more secure and compatible with international standards, which is important for the business community and for the country as a whole, senior customs officials said in Accra.

Hundreds of commercial shipments reach Ghana's borders each day. By rigorously performing risk assessments on the advance data sent by the party who is in the best position to provide it, the GRA is better able to assess the level of risk associated with each shipment.

At the International Air Transport Association (IATA) Advance Cargo Information (ACI) workshop in Accra, the Kotoka International Airport (KIA) Sector Commander of the Customs Division of the GRA, Madam Theresa Kyei Asare, said: "The eManifest system will simplify the process and make the clearing system faster. For example, if you are supposed to deliver the goods within 48 hours, with the electronic manifest, we will be able to deliver within 24 hours or even at a shorter time.’’

Madam Asare stressed that eManifest would also allow a seamless dissemination of information on all cargo due in the country by air to all relevant stakeholders in real time.

The eManifest is the first and foremost document that customs officials require in order to process cargo clearance, she added.

"This is very welcome because it will make our work very simple, efficient and curtail the stress of moving from one airline operator to the other for the manifest manually to commence clearing processes.

"With the eManifest, we are talking about five minutes at most and you have all the information you need to speed up the process. This is a win-win for us because it brings respite to us and the importers or shippers as well,’’ Madam Asare told participants in the workshop.

In an interview, the Manager in charge of training at West Blue Consulting, Mr Ransford Mensah, emphasised that the platform was aimed at deploying technology in the entire scope of operations at the airport, including boarding through to landing, as well as the manifest section itself to ensure effective trade facilitation through automation with the associated benefit of reducing the cost and time of doing business in the country.

The platform, according to Mr Mensah, allows authorised customs officials to log in and transact business without hindrance, stressing that the platform had been programmed to operate from end-to-end.

Reacting to concerns by some stakeholders at the workshop for room to be made for an additional manifest to address the situation in which a cargo arrived at the airport but was not captured in the manifest, Mr Mensah assured them that the company was going to consider all their concerns raised and factor them into the platform.

Another concern which was raised by the airliners was network or system failure, but the Deputy Head of IT at West Blue Consulting, Mr Gilbert  Frimpong, assured that the company and its partners would provide 24/7 ubiquitous internet service for the platform.

Taking the participants through an overview of IATA on Advance Cargo Information (ACI) at the workshop which aimed among other things at enhancing the skills of air cargo professionals, the Regional Manager for Africa in charge of Airport, Cargo, Passenger and Security at IATA, Mr  Getnet Tilahun Taye, enumerated the benefits that the country would derive from the implementation of the ACI.

Recently, the Chief Executive Officer of West Blue Consulting, Madam Valentina Mintah, revealed that  25 airlines electronically submit their manifests to the Pre-Arrival Assessment Reporting System (PAARS) up to four hours before landing at the KIA.

Previously, they were submitted in hard copies to ground handlers after the arrival of the airlines at the airport.

The PAARS is a modernised system that has been developed by the Customs Division of GRA as part of the implementation of the GNSW project to enhance revenue mobilisation, improve border security and customs clearance, overcome duplication across regulatory agencies and promote trade facilitation.

Madam Mintah explained to members of the Parliamentary Select Committee on Trade, Industry and Tourism  during a working visit to the company that, “Customs and other agencies can get access to data in a timely manner to complete clearance processes even before the ship or plane arrives.”
— GB