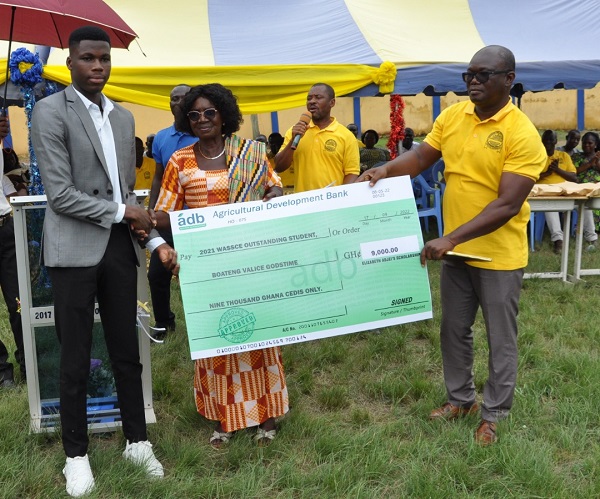 Mr Mawuli Dzamefe, President of the 1991 Year Group of the OSUA (right), presenting a cheque to one of the beneficiaries, Valice Godstime Boateng.
30.5k Shares

FIVE past students of the Awudome Senior High School (AWUSCO) at Tsito in the Volta Region who excelled in the 2021 WASSCE were last Saturday honoured by the alumni of the school.

Each of them was presented with a cheque of $1,000 during the 2022 Homecoming Durbar of the school.

The President of the Old Students Union of AWUSCO (OSUA), Prof. Leonard K. Amekudzi, said, “This is to help them in their further studies and inspire current students of the school to emulate them.”

He said the monies were disbursed to the beneficiaries under the newly established Elizabeth Adjei Scholarship, which was named after the mother of an old student of the 1991 Year Group who is sponsoring the annual scheme.

Prof. Amekudzi, who is a Provost/Climate Scientist at the Kwame Nkrumah University of Science and Technology, gave an assurance that the scholarship would be sustained and awarded to deserving students every year.


In a related development, the Best Female Student in the 2021/22 academic year, Selorm Jennifer Mawudze, was also awarded $200.
Other deserving students were presented with a variety of prizes.
Prof. Amekudzi entreated the current students to study diligently towards a bright future and help lift the flag of AWUSCO to greater heights.

He said the growing enrolment required more and expanded infrastructure and other facilities to contain it.
Mr Meteku, therefore, appealed to the alumni of AWUSCO to continue supporting the institution in various ways to enhance teaching and learning and raise and maintain academic standards of the school which had produced men and women of great substance for the nation over the decades.

Meanwhile, the 2021/22 Year Group of AWUSCO presented a saloon car to the school in aid of health services on the campus.
The final-year students of the school were inducted into OSUA during the homecoming.