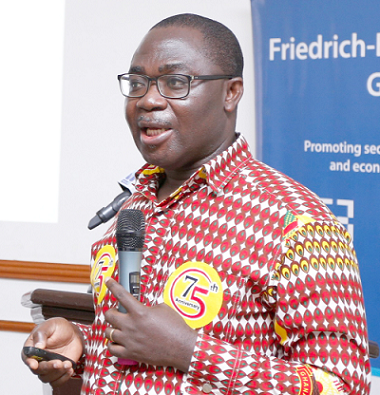 The Trades Union Congress (TUC) is calling for a review of the Single Spine Salary Structure (SSSS), saying it has not served its purpose.

The TUC explained that the SSSS was introduced with clear objectives, one of which was to eventually lead to enhanced pay for people in the public sector.

Speaking at an Economic Forum on the 2021 mid-year budget, which was organised by the TUC, the Director of the Labour Policy and Research Institute of the TUC, Dr Kwabena Nyarko Otoo, said the SSSS was also meant to address some of the inequities in the public sector salary structure and ultimately reduce bargaining centres within the public sector, but noted that all of those objectives had not materialised.

The TUC’s Director of Research said if university teachers, for instance, got the $2,000 base pay they were asking for, it would mean that everybody at their level must have that, which might be difficult to do, for which reason the obvious way out was to exit the SSSS.

He also noted that while the SSSS had the objective of bringing all public service entities to one bargaining centre, some of the entities had separate laws that incorporated them, which also defined different routes for determining their salaries.

He said some of them even wrote to the Fair Wages and Salaries Commission (FWSC) that the law said their wages should be determined by their governing boards, not the FWSC.

“So one of the things the SSSS failed to do was harmonise the laws on the determination of paying public sector workers,” Dr Otoo said.

Suspension of the deregulation exercise

The TUC urged the government to suspend the deregulation policy in the petroleum sector.

Dr Otoo said the exercise had led to high fuel prices in the country and considering the hardships that many Ghanaians find themselves in as a result of COVID-19, it had become necessary to suspend the policy.

He also urged the government to take a second look at the price build up for petroleum products in the country.

“For a particular product to have over six taxes and levies is abnormal so we are asking the government to look at the price build up for fuel and possibly there are some nuisance taxes and levies they can eliminate,” he said.

Dr Otoo also pointed out that the TUC believed the time had come for the tripartite committee, which determines the base pay of public sector workers, to review the variables used in arriving at salary increases.

He said over the years, the major determinant had been inflation, but there was the need to bring in other variables, such as the real cost of living, because the previous method did not work to the benefit of employees.

He explained that inflation was just a representation of cost of living but not the actual, hence the need to use the living cost

“Inflation could be showing a downward trend but rent prices will be rising so we need to open it up and bring in some of the individual cost items that significantly affect people,” he stated.

Productivity being a factor

Dr Oduro noted that it was a legitimate concern, if the government also wanted to factor in productivity as a determinant for salary increase.

“This is not backed by any facts and may not live up to empirical scrutiny. You have one police officer taking care of 1000 Ghanaians but to a very large extent there is some level of peace and stability in the country, can you say the police officers are not doing well?”

“We have one nurse taking care of about 800 people when it should be 500 or below but to a very large extent, our health sector is not that bad, can you say they are not being productive?

He said while there were a lot of things that could be done to improve public sector productivity, that onus lay with the employer and not the employees.