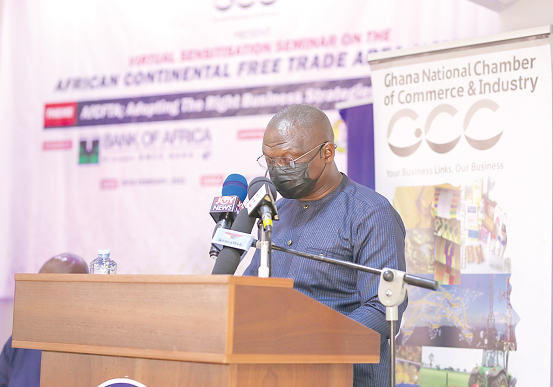 Ghana has put in place an institutional framework to help maximise gains from the African Continental Free Trade Agreement (AfCFTA) which took off on January 1, this year.

It includes the establishment of the AfCFTA inter-ministerial committee, national steering committee, and technical working groups on all the seven clusters for boosting intra-Africa trade.

The Minister designate for Trade and Industry (MoTI), Mr Alan Kyerematen, made this known in a speech read on his behalf by Dr John Asiedu, at an AfCFTA sensitisation seminar in Accra yesterday.

On the theme, “AfCFTA: Adopting the Right Business Strategies to Fully Benefit,” the event, which was broadcast live on radio and virtually, created a platform for Ghanaian businesses to be equipped with the know-how to be able to explore opportunities under the initiative.

It was an initiative of the Ghana National Chamber of Commerce and Industry (GNCCI) with support from the Ghana Shippers’ Authority (GSA) and other corporate institutions.

Mr Kyerematen explained that the government had established the key national institutional structures to oversee the implementation of the AfCFTA initiative locally.

That, he said, was to help Ghanaian businesses to fully participate and explore opportunities under the agreement.

“For Ghana to benefit from the initiative, there is an urgent need to create the awareness among regulatory authorities, including the Customs Division of the Ghana Revenue Authority (GRA), economic operators, producers and exporters, as well as the logistical sector.

These are the factors that will make the agreement work on the ground. If there is no awareness, we cannot harvest its benefits”.

The minister designate also noted that, “In addition, we need to develop concrete ways to enable regulatory authorities and economic operators to interface with the system that are being established under this agreement to agree on the rules of origin, customs facilities and procedures for export and import of goods”.

He said he was fully convinced that the coming into being of the AfCFTA initiative was one of the most important decisions taken by the African Union (AU).

According to him, the government sees an increase in trade as the surest way to deepen regional integration in Africa.

Ghana's current exports to Africa is about $1.4 billion and although the country’s exports to the continent have been growing at an annual rate of 10.2 per cent since 2015, its share of intra-African trade (imports and exports) is about four per cent.

The Minister designate for Foreign Affairs, Ms Shirley Ayorkor Botchway, also in a speech read on her behalf, stated that AfCFTA provided an exceptional opportunity for Africa to harmonise its continental trade environment and boost intra-African trade.

However, she said, it should be designed in a way that would serve as a win-win for all Africans.

The President of GNCCI, Mr Clement Osei-Amoako, noted that the private sector’s interest and support to the AfCFTA had been phenomenal.

He said that was based on the premise that production and distribution of goods and services were largely undertaken by the private sector.

Subsequently, he said the private sector, which was made up of diverse actors, including but not limited to producers, transporters, traders, and retailers, was an indispensable partner to the success of the AfCFTA.

“As a chamber, we are excited that the journey to opening up new market access opportunities to drive the needed economic growth and transformation of the African continent has begun.

“The business community stands to benefit from the removal of tariffs on goods and services, as well as the elimination of non-tariff barriers which hamper trade between countries.

The Chief Executive Officer of the GSA, Ms Benonita Bismarck, added that her office was committed to partner relevant stakeholders to ensure that the country maximised the full potential of the initiative.