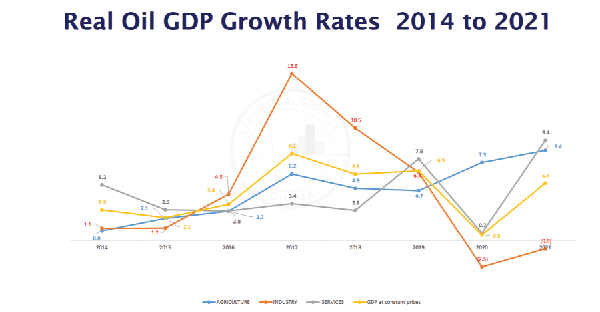 The economy expanded at a faster rate last year than the government and international bodies had projected.

The 2021 growth rate is also healthier than the revised growth rate of 0.5 per cent for 2020, provisional data from the Ghana Statistical Service (GSS) has showed.

The data which was released by the Government Statistician, Prof. Samuel Kobina Annim, yesterday indicated that the economy was now worth more than GH¢459.13 billion in 2021 compared to 2020 when it was valued at more than GH¢391.94 billion.

It showed that non-Gross Domestic Product (GDP) grew by 6.9 per cent last year.

The provisional real GDP growth rate is also higher than the estimates by the Bretton Woods institutions for the period.

Last year, the International Monetary Fund (IMF) and the World Bank projected that the economy would expand by 4.7 per cent and 4.1 per cent respectively, compared to 5.4 per cent growth rate announced.

The higher-than-projected growth rate for last year strengthens hopes that the country is on its way to full recovery from the effects of the COVID-19 pandemic.

The government statistician said it also meant that the economy was recovering quickly from the COVID-19 pandemic than initially anticipated.

He, however, indicated that the country needed to be cautious in assuming that the economy had fully recovered as the data showed that growth had not fully returned to the pre-pandemic levels.

He added that pockets of challenges still remained as evidenced in the sluggish growth and contractions exhibited in some sub-sectors of the economy.

Prof. Annim said the data indicated that last year’s growth rate was driven by strong growth in the fourth and third quarters.

He said overall GDP growth was also driven by large expansions in the services and agricultural sectors, as the industry sector suffered a contraction in growth.

The government statistician said while the services sector expanded by 9.4 per cent, the agricultural sector grew by 8.4 per cent.

He said growth in the services sector was led by 33.1 per cent growth in the information & communication sub-sector, which recorded the highest year-on-year GDP growth rate.

He said growth in the education sub-sector contracted by 3.7 per cent, making it the worst growth rate in the services sector.

He said the crops sub-sector also grew by 8.9 per cent, driven largely by a 10.8 per cent growth rate in cocoa production.

The government statistician said the data further showed that the industry sector contracted by 0.8 per cent as a result of a 12.1 per cent contraction in the mining and quarrying sub-sectors.

He said the water and sewerage sub-sector recorded the highest year-on-year annual GDP growth rate of 13.3 per cent for 2021, followed by the manufacturing sub-sector which expanded by 7.8 per cent.

The mining and quarrying sub-sector recorded the lowest growth rate with a contraction of 12.1 per cent.

Petroleum production, which the GSS captures as oil and gas under the mining and quarrying sub-sector, also suffered a contraction in growth last year.

The data showed that growth in that sub-sector declined by 12.4 per cent in 2021.