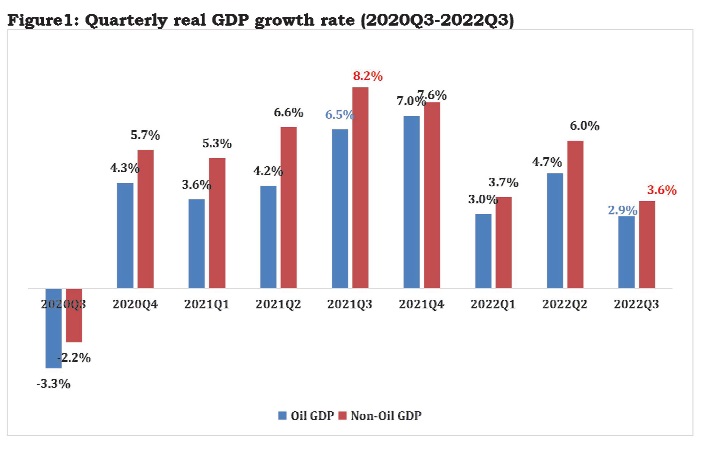 The economy recorded a slower growth of 2.9 per cent between July and September this year, compared with the same period last year, provisional data from the Ghana Statistical Service (GSS) have shown.

In the same period last year, the growth in the real value of goods and services as measured by the Gross Domestic Product (GDP) was 6.5 per cent, compared with the same period in 2020, the data indicated.

The Government Statistician, Professor Samuel Kobina Annim, who presented the quarterly Gross Domestic Product (GDP) report in Accra yesterday, indicated that the economy was now worth more than GH¢44.29 billion when measured in constant prices (real GDP), compared to the GH¢43.10 billion economic worth last year.

He said the report showed that non-oil GDP for the third quarter of the year grew by 3.6 per cent, as against the 8.2 per cent growth recorded in the same period in 2021.

While real GDP compares changes in the prices of goods and services to the base year of 2013, GDP at current or purchaser’s value measures the prices as they pertain in the market currently at the time of evaluation.

Consequently, the GSS put the GDP at current prices at the third quarter of the year to be GH¢149.87 billion, compared to GH¢112.49 billion in the same period last year.

The growth was driven by gains in three sub-sectors, which expanded by more than 10 percentage points in quarter three.

They are information and communication which grew by 18.4 per cent; mining and quarrying, which grew by 14.9 per cent, and education, which went up by 10.2 per cent.

However, nine other sub-sectors dragged the economic growth for the quarter under review.

Water contracted by 3.9 per cent and three per cent respectively.

The Government Statistician said the agricultural sector recorded the highest growth of 4.6 per cent, followed by the services sector, with a growth of 3.9 per cent, while the industrial sector grew by 0.9 per cent.

The growth of the crops and the cocoa sub-sectors improved marginally to 0.9 per cent, from 0.8 per cent in the second quarter of this year.

He said the livestock sub-sector declined to 1.1 per cent, from the 1.2 per cent recorded in the second quarter of this year.

According to him, the forestry and logging sub-sector expanded by 1.1 per cent in the third quarter of 2022.

“There were contractions in the construction, electricity and water supply, sewerage, waste management and remediation activities sub-sectors in the third quarter of 2022, compared to the second quarter this year.

“Health and social work activities and education recorded a growth rate of 2.2 and 2.8 per cent in quarter three of 2022 from 3.3 and 3.1 per cent, respectively, in quarter two of 2022,” the statistician added.

“Finance and insurance maintained its 1.1 per cent growth between quarters two and three of 2022.

“There were, however, contractions in the remaining activities within the services sector,” he added.