“Create sovereign reserves to respond to the continent’s financial crises” 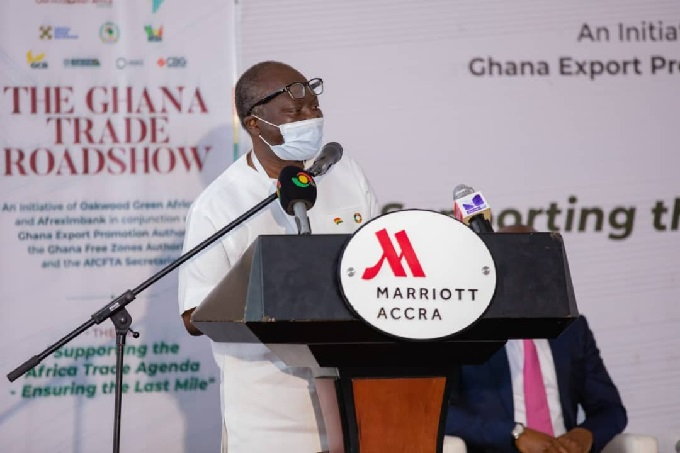 Finance Minister Ken Ofori-Atta has urged Central Banks in Africa to endeavour to create combined sovereign reserves that could expand their balance sheets to respond to financial challenges amongst African Union member states.

He was of the view that whereas the combined sovereign reserves stood at about $300 billion to $500 billion making it a quarter or about 1. 2 percent of the global reserves, and member states borrowing funds from external sources at an eight percent interest, it would be imperative to rather have the African Export–Import Bank (Afreximbank) or the African Development Bank (AfDB) to have control over such reserves.

Doing so, he said, could create a good balance sheet that countries could all leverage on as a continent to mitigate potential adverse consequences within the global financial space, Mr. Ofori-Atta said.

“It is hard to believe that Africa had just two percent of all of the world's trade especially when you think about all the tremendous resources that they have in terms of diamond, gold, cocoa, tea, coffee among others, and to think that Africa still contributes only two percent is rarely strange,” he said.

Similarly, he expressed worry that Africa is at the bottom of the pyramid in terms of the Western concept of investments, “so how can we not have a reserve currency with all of the mineral resources that we export?” He quipped.
Addressing the business community at the closing session of the three-day Ghana Trade Road Show in Accra on Friday, Mr. Ofori-Atta noted that having a reserve currency puts the continent on a platform to determine what it could do regarding challenges within the global financial architecture. 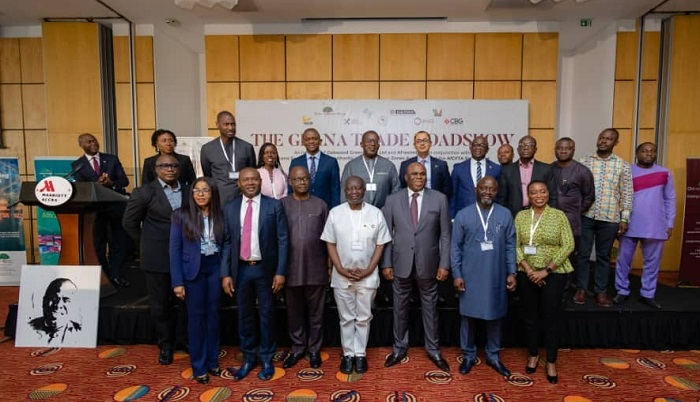 Trade Show
The Trade Show was organised by Oakwood Green Africa in partnership with the Afreximbank, the Africa Continental Free Trade Area (AfCFTA) Secretariat and the Ghana Export Promotion Authority (GEPA) with the Ghana Investment Promotion Centre and the Ghana Freezones Authority as partners.

The programme had representatives from the Ghanaian banking and finance community, the small and medium enterprises sector, exporters and producers of locally made products in attendance.

Participants were also introduced to the Afreximbank’s initiatives of providing African countries with a single payment platform that will facilitate the payments for goods and services in the local currencies of the respective countries.

It also sought to support the expansion, diversification, promotion and trade development projects to accelerate intra-African trade, and boost the continent’s trading position on the global market to accelerate economic growth, industrialisation, and job creation.

Opportunities
Mr. Ofori-Atta noted that Africa went through a very shameful period during the Covid-19 time in which sovereign dominance with regard to vaccine procurement became really a “shame and a disgrace” to the common humanity across the globe.

He said it was only when the Afrieximbank decided to push the envelope and create some $4 billion for the member states that the World Bank joined, since Africa was meant to be devastated by the pandemic.

“This is why it will be important for our central banks to change the obvious dynamics, provide the needed leadership so we turn our challenges into opportunities,” the Minister counselled.

While commending Oakwood Green for the roadshow to sensitise and create opportunities for companies across the continent to trade under the AfCFTA, Mr. Ofori-Atta tasked the participants to also cease the opportunities the meetings provide them to turn their businesses around.

Afreximbank
The President and Chairman of Afreximbank, Prof Benedict Oramah said the bank in pursuit of its priorities, has designed policies that underscore deep support for the AfCFTA “which in our view is Africa's unique opportunity to address many of its economic development challenges.”

These, he noted, will help improve trade, and all the benefits that come from trade, including industrialisation, improvement in infrastructure development and reduce carbon emissions from shipping activities.

“If we stop shipping our raw materials to far away countries where they are processed and reshipped to us, we would cut carbon emissions significantly and this is one of the justifications of yielding regional value chain through the AfCFTA,” Prof Oramah said.

Disbursement
The bank, he also suggested, has through its intra-Africa Trade Division, disbursed over $20 billion over the last five years in favour of intra-Africa trade and investments and under a six-point strategic plan which commenced January this year. They envisage to disburse an additional $400 billion over the next 5 years.

Ghana, he also said, has since the inception of the bank received a disbursement of $5 billion with over $1.3 billion of the disbursement being done within 2020 to 2022.

Ghana, Prof Oramah also indicated, was also one of the beneficiaries of the bank's Advance Procurement Commitment Facility which enabled the continent to access 400 million doses of the Jansen & Jansen Covid-19 vaccines when it mattered.

“The bank is aware of the development priorities of Ghana and other interventions have been crafted to focus on these priorities, and is presently working on the approval of over $2.25 billion dollars to meet those priorities,” he said.

The bank, he also said, is also providing trade finance confirmation for several Ghanaian banks, supporting the importation of refined petroleum products, and also working to support the development of a major fertiliser facility that will make Ghana a net-exporter of fertiliser in the very near future.

PAPSS
He stressed that the recently introduced Pan-African Payment and Settlement System (PAPSS) which seeks to centralise payments and settlements for intra-African trade allowing for the payment of transactions in the local currencies of each countries, is one such initiative the bank is pushing through the AfCFTA to be able to sustain the continent’s reserves.

Presently, eight African central banks and over 45 commercial banks and 16 financial institutions, he said, have joined the PAPSS platform, an indication of a full continental rollout.

While commending the Bank of Ghana for its continuous support and for always being the first to pay its equity contribution, Prof Oramah reaffirmed the Afreximbank’s commitment in supporting the railway project being pursued by Ghana to help move goods from Ghana to Burkina Faso and vice versa.

BoG
The Governor of the Bank of Ghana, Dr. Ernest Addison, said that trade constraints in Africa are partly linked to small, fractured, and partially-isolated markets, hence an effective implementation of the AfCFTA would be a giant step forward to integrate into the global trade agenda.

“To play a relevant role in this space, it will require the commitment from all countries and all stakeholders, and I see the Africa Trade roadshow series as one that could facilitate and create the enabling environment for trade for all stakeholders in the trade industry across the continent to form partnerships that would yield growth,” Dr. Addison said.

Oakwood Green
The Managing Partner at Oakwood Green Africa, Mr. Gabriel Edgal in his welcome remarks pointed out that the intra-Africa trade agenda could not be achieved if local markets do not wish to be part of the solution.

Trade, Mr. Edgal said, remains an important driver for economic growth and development in Africa, and the inability to collaborate amongst member states would mean the continued dependence on trade in primary goods, high product and market concentration from other sources which only go to create jobs and wealth for them.