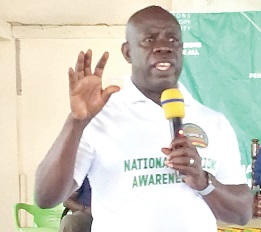 The Chief Executive Officer of the National Pensions Regulatory Authority, (NPRA), Hayford Attah-Krufi, has stated that pensioners do not need lawyers to access their pension benefits after retirement.

He said the authority had directed the Social Security and National Insurance Trust (SSNIT) to fast-track the claim processes to avoid delays.

During an outreach campaign by the NPRA in the Oti Region this week, the NPRA CEO said contributors were also encouraged to update their information to avoid the delays that wrong information and irregularities always caused.

He said the measures had been accepted and well implemented by all pension providers, including SSNIT, to the benefit of pensioners.

A statement from the authority said the outreach programme was to sensitise the public and encourage the informal sector workers in the area to understand and appreciate the need to join and actively participate in pension schemes.

It said the week-long programme saw fora on pensions at Kete-Krachi, Dambai and Nkwanta, all in the Oti Region, to educate the informal sector workers.

It said the NPRA also used the opportunity to educate formal sector workers on pension issues affecting them.

The team also engaged market women, drivers and other traders at markets and lorry terminals, the statement said

Mr Attah-Krufi bemoaned the process where pensioners live miserable lives after pension chasing their benefits for years. He said when all processes were done well and in time, accessing one’s pension benefit must neither be surrounded by litigation nor end up in the law courts.

“After serving one’s country, no one needs to go through any form of stress to receive what is due him or her,” he noted.

The CEO, therefore, advised employees to regularly update their records with the pension service providers, especially SSNIT to facilitate the processing of their benefits.

He mentioned some of the causes of delays in the processing of pension benefits as multiple dates of birth, irregularities in contribution and change of names.

He, therefore, advised employees to check these before their retirements.

Mr Attah-Krufi said the third-tier pension scheme was designed to help the informal sector workers to participate in pensions to enable them to avert old-age poverty. He noted that it was voluntary and a privately managed provident fund and personal pension scheme fully funded by members that ensured retirement income security for all Ghanaians