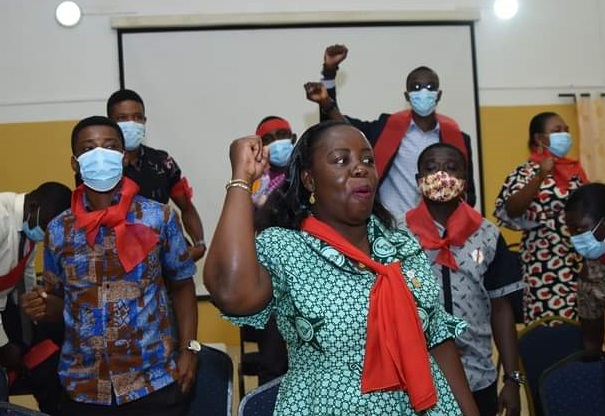 President of the GRNMA, Perpetual Ofori-Ampofo

Nurses, midwives, physician assistants and anesthetists will resume work at 8 a.m. today, after they had called off a three-day nationwide strike which left many patients stranded at public health facilities.

Addressing a press conference in Accra yesterday, the President of the Ghana Registered Nurses and Midwives Association (GRNMA), Ms Perpetual Ofori-Ampofo, said the association and its allies, including the Ghana Physician Assistants Association and the Ghana Association of Certified Registered Anesthetists, decided to suspend the strike in respect of a court injunction served on them last Tuesday.

The National Labour Commission (NLC) had, on Friday, September 18, this year, secured an injunction against the strike, but the association still went ahead with it on Monday because it said it had not been served with the court order.

"Around 4:30 p.m.yesterday, Tuesday, September 22, 2020, we received notice from the head office administrator that a court bailiff had formally and properly come to the office to serve the injunction on the GRNMA and its associates," Ms Ofori-Ampofo said.

"In the face of the injunction, our respect for the court, coupled with our innate passion to serve our patients and clients and for that matter the good people of Ghana, we have decided to temporarily suspend our strike with effect from 8 a.m. on Thursday, 24th September, 2020, pending the outcome of our negotiations," she said.

"For the avoidance of doubt, we wish to indicate that the strike is merely suspended, and our gallant nurses, midwives, PAs and CRAs are to begin full work at 8 a.m. on Thursday, 24th September, 2020, with the morning shift," he stressed.

"For the avoidance of doubt, we wish to indicate that the strike action is merely suspended and our gallant nurses, midwives, PA's and CRA's are to begin full work on Thursday 24th September 2020 at 8 am with the morning shift".

It will be recalled that the GRNMA and its allied associations including the Ghana Physician Assistants Association and Ghana Association of Certified Registered Anesthetists withdrew their services on Monday, September 21, 2020, as part of their demands for improved conditions of service.

With a strip of red cloth draped around her neck, Ms Ofori-Ampofo also served notice to all employers, including the Ministry of Health, to halt intimidating members of the GRNMA at health facilities with immediate effect.

"We (GRNMA) will not tolerate any form of intimidation or victimisation from our employers, their agents or representatives in any facility," she said.

"We want them to note that an attack on any nurse, midwife, PA or CRA at any facility anywhere in the country is an attack on the entire fraternity in Ghana, and that if it comes to our notice, we shall deliver the appropriate response," she added.

Ms Ofori-Ampofo further gave an assurance that the GRNMA would return to the NLC to resume negotiations for improved conditions of service.

She urged the public to support the bid for improved terms of employment, as it was vital for improved healthcare services.

"We also ask the public to add their voice and ask the employer to take good care of us, so that we can be in a better position to take better care of them,” she said.

The strike, which began last Monday, had a debilitating effect on patients, as there were no nurses to attend to their needs.

Some patients had to resort to private health facilities, where they had to pay more for the services they received.

At the Tema General Hospital, for instance, the Medical Director, Dr Anthony Richard, told the Daily Graphic that there had been no nurses at post during the strike, except a few who were handling babies in incubators at the Neonatal Intensive Care Unit (NICU)

He said all medical doctors at the facility were at post and some had to do nursing duties for in-patients, adding that some of the patients were being referred to the 37 Military Hospital, the Police Hospital or private facilities of choice by relatives of such patients.

The Accra High Court, last Tuesday, ordered that another summons be served on the GRNMA to restrain it from embarking on a strike.

That was after the NLC had secured an order for a substituted service from the court to compel the GRNMA to present itself for compulsory arbitration, pursuant to Order 19 of C.I. 47 and sections 172, 162 and 163 of Act 651 filed on September 18, 2020.

The Industrial/Labour Court 1, subsequently, granted the motion filed by the Executive Secretary of the NLC, Mr Ofosu Asamoah, restraining the GRNMA from carrying on with its strike.

But the nurses and other health workers continued with their industrial action, arguing that they had not been served any summons.

Per the court order, which was the second in three working days, copies of the summons were to be posted on the notice board of the court at the Law Complex in Accra and on the door or gate of the GRNMA’s office premises at digital address GA 059-3733.

Three media houses were also selected to facilitate notification to the health workers to call off their strike and go for negotiation.

Watch the press briefing below;