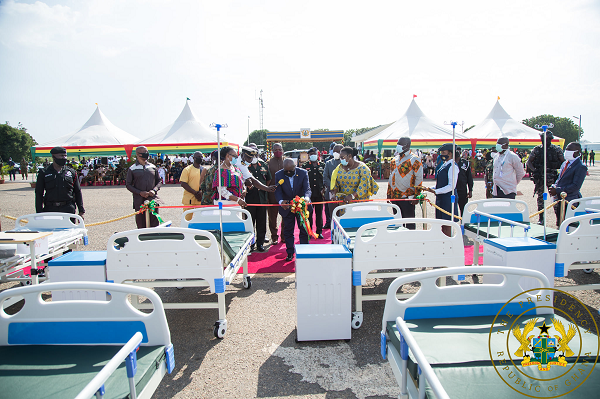 President Nana Addo Dankwa Akufo-Addo has presented 10,000 hospital beds to the Ministry of Health (MoH) for distribution to health facilities across the country.

He also inspected ongoing works at the 65-bed COVID-19 Treatment Centre at Pantang in the Greater Accra Region, which construction is being sponsored by the Electricity Company of Ghana (ECG) as its corporate social responsibility (CSR).

The President, who made the presentation at the Air Force Base at Burma Camp in Accra yesterday, said the beds, which had been customised to maximise comfort for patients, would be distributed to health facilities in all 275 constituencies.

President Akufo-Addo said the provision of the beds formed part of the government’s Infrastructure for Poverty Eradication Programme (IPEP) initiative.

“It is always disconcerting to see patients treated in wheelchairs, plastic chairs and even on the floor because of the unavailability of beds,” he added.

He said the determination by the government to address the situation was the rationale behind its decision to procure the beds.

The President said the IPEP was a campaign promise to provide each of the constituencies with $1 million to tackle critical infrastructure and poverty eradication activities in rural and deprived communities.

He said the implementation of the programme started with the launch of the One-district, One-warehouse policy in Ejura and the unveiling of the One-village, One-dam policy in Lawra in the Upper West Region.

President Akufo-Addo added that the distribution of 307 ambulances in February this year — one ambulance per constituency and 32 to the National Ambulance Service — was also part of the programme.

“These ambulances have been of immense help in effective emergency medical services (EMS) and also improved our country's emergency response capabilities,” he said.

According to the President, the Ministry of Special Development Initiatives, which is implementing the IPEP, together with the Coastal, Middle Belt and Northern Development authorities (CODA), had so far seen to the construction of many infrastructural projects.

A Deputy Minister of Health, Mrs Tina Mensah, said the injection of the 10,000 beds into the healthcare system would reduce the “no-bed syndrome” in some health facilities.

She said in addition, equipment would be distributed to all health facilities, especially those which did not have the full complement of medical equipment, including community-based health planning services (CHPS) compounds.

At Pantang, President Akufo-Addo inspected works on the COVID-19 Treatment Centre, which will eventually be converted to an infectious disease treatment hospital.

He commended the ECG for the foresight in constructing the centre and said one of the lessons learnt from the pandemic was the realisation that the country must be self-reliant.

According to him, the pandemic had also brought to the fore the need to put in place more efficient health infrastructure, which the government was determined to pursue.

“And so to come here today and to see this collaboration between public and private entities and the government is reassuring and very warming to my heart,” he added.

He further said the government would build two new psychiatric hospitals in the north and the middle belt, as well as infectious disease control centres.

The Minister of Health, Mr Kwaku Agyemang-Manu, explained that the COVID-19 Centre was being developed from a building that was originally meant for the Ghana Health Service but abandoned after the Kufuor Administration left office in 2009.

He thanked the ECG for supporting the government to redevelop the facility.

The Board Chairman of the ECG, Mr Kelli Gadzekpo, said the company’s support was in response to the request made by the President to both corporate organisations and individuals to support in the fight against the pandemic.

He said the ECG’s COVID-19 Support Committee, in collaboration with other stakeholders, took the decision to put up the facility.