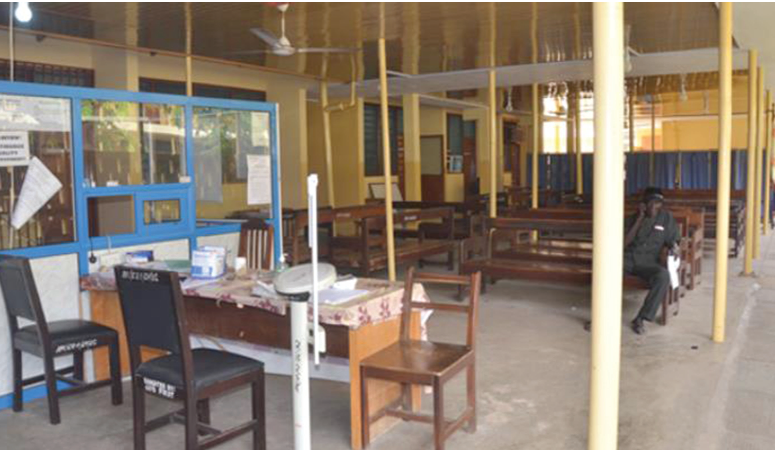 Patients were stranded in hospitals across the country, as nurses and some other health workers embarked on strike

Many patients were left stranded in hospitals across the country, as nurses and some other health workers yesterday began their industrial action to demand better conditions of service.

Despite an interim injunction secured by the National Labour Commission (NLC) to restrain members of the association from laying down their tools, the nurses carried through their plan, bringing healthcare services to a halt at many public health facilities.

At many of the facilities, patients who had gone there to seek medical help were left stranded, as there were no nurses to attend to them and consequently lead them to doctors.

The outpatients departments (OPDs), which are the first port of call for all patients at health facilities, showed no sign of activity, as the desks for nurses were empty, with no one around from whom one could make enquiries.

Some patients who were not aware of the strike and had gone to seek treatment were left to consider other options.

In some facilities, doctors had asked other staff to step in to help, so that patients could be attended to.

At the OPD of the Adabraka and the Korle Bu polyclinics, as well as the Greater Accra Regional Hospital (Ridge Hospital), the situation was not different, Emmanuel Bonney reports.

At the Adabraka Polyclinic, for instance, there was virtually no activity, as everywhere, including the main car park, was empty.

One female worker of the Pharmacy Department was, however, seen attending to a few patients.

She told the Daily Graphic that she was asked by a doctor to hold the fort in the absence of the nurses.

“Because the nurses are on strike, the doctor asked me to come and sit here and attend to the few people who come around,” the worker, who would not mention her name, said.

A patient, Emmanuel Tetteh, who was seen holding a folder, said, indeed, he had been attended to by a doctor after going through the necessary protocols.

“I did not see any nurse around when I came here. After going through the protocols of checking my temperature and blood pressure by the lady in the booth, I was asked to go and see a doctor,” he said.

Another patient, Madam Serwaa, who took her child to the polyclinic, said they had been attended to by a doctor, although the nurses were not around.

“The lady sitting at the OPD was asked to attend to us, after which we went to see a doctor,” she said.

At the Ridge Hospital, except for people who had their relatives on admission at the facility, no one was seen at the OPD.

Other offices at the facility were also locked up.

A security man said the nurses’ action had been compounded by the fact that yesterday was a holiday.

“Today is a holiday and so many of the offices are closed and that is why the place is quiet. I cannot say if they are on strike or not. But I have not seen nurses around today. You will get a better picture when you come around tomorrow,” he said.

Officials of the two facilities were not available for comment at the time of the Daily Graphic’s visit.

A staff member of the Korle-Bu Polyclinic said all those on admission at the facility were expected to be discharged by 5 p.m. yesterday, since the nurses were not around.

“We are discharging everybody here because the nurses are not around. Except for the nurses, all the other staff are around,” he said.

From Tamale, Samuel Duodu reports that nurses and midwives had fully complied with the directive by their national executive to boycott work.

When the Daily Graphic visited the Central and the West hospitals in the Tamale metropolis, it observed that the facilities were completely deserted.

The Public Relations Officer (PRO) of the Northern Regional branch of the GRNMA, Mr Mohammed Amin Imoro, confirmed the strike by its members in the two health facilities.

He said the strike was currently in full force, saying the decision was taken by the national council of the association and the regional branch had to comply.

Meanwhile, some inpatients and outpatients at the two health facilities appealed to the government to meet the demand of the striking health workers for them to go back to work.

When the Daily Graphic visited the Upper East Regional Hospital at 11:45 a.m. yesterday, the usual bustle at the OPD was absent, as the place was deserted by both patients and nurses, reports Vincent Amenuveve from Bolgatanga.

A man, Mr Philip Adongo, said he was not aware of the strike and was thus compelled to take his relative he had sent to the hospital for treatment to a private hospital instead.

The Administrator of the Upper East Regional Hospital, Dr Yakubu Zakariah, told the Daily Graphic that the strike by the nurses at the hospital “was unexpected”.

He explained that normally when there was a strike, the OPD was the first to be affected, and then as the days went by, the other departments or units also joined, but “for this strike it is so sudden and a complete withdrawal of services, as nurses in all our units have decided not to work today".

He intimated that the nurses had argued that although they had heard about the court injunction, they had neither been served nor directed by the national leadership to suspend the strike.

On the measures the hospital had put in place to contain the situation, the administrator said “the doctors available, with the help of some benevolent individuals, will support patients until the strike is over".

In a statement issued last Thursday, the GRNMA threatened to lay down its tools in demand of better conditions of service.

It said the government’s stance during negotiations fell foul of Act 651 of the Labour Law, which deals with issues of good faith for stakeholders, with which the association appears to have an issue.

The statement, signed jointly by the presidents of the GRNMA, the Ghana Physician Assistants Association and the Ghana Association of Certified Registered Anesthetists, also directed the public to seek medical attention from other health facilities.

On September 18, the NLC obtained an interlocutory injunction against the GRNMA to restrain the association from embarking on its proposed strike.

The Accra High Court (Labour Division Court 1), presided over by Justice Frank Aboagye Rockson, in granting the injunction, ordered the nurses to sit down with the NLC to get their grievances resolved.