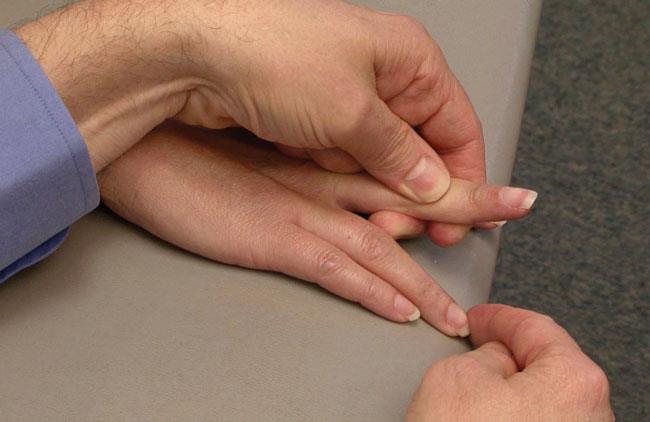 A Trigger finger is a condition which affects the finger(s). It is also known as Stenosing Tenosynovitis.

Trigger Finger occurs when a finger or thumb “locks” when bending and it is then difficult to straighten it. If the condition affects the thumb, it is called Trigger Thumb.

Generally, the tough cords (tendons) in the fingers slide smoothly through a series of small passageways in the fingers as you bend and straighten your fingers. Tendons are cord-like fibres that attach muscles to bones.

This makes it quite difficult for the tendon to pass through, therefore, it may temporarily lock at the narrow passageway and then suddenly release like a "trigger" as it overcomes the resistance whenever the individual straightens the finger.

Trigger Fingers are more common in women than men and also may occur in children under eight but most commonly seen in adults who are between the ages of 40 and 60 years of age.
Whereas in children the thumb is most involved, in adults the fingers affected may be the thumb or the ring finger.

Why do I have this problem?
The precise cause of Trigger Finger is not known - it may occur for no obvious reason. In some individuals it may occur after they continuously use tools that press into the palm. The condition occurs as a result of a narrowing of the sheath that surrounds the tendon in the affected finger.

Any activity or condition that causes damage of the tendon or sheath may be a risk factor for Trigger Finger. Other activities or conditions may include Rheumatoid arthritis, the long-term use of hand tools such as the hand drill, the long-term repetitive movements of the fingers, for example, playing video games or texting using mobile phones for prolonged periods of time, direct injury to the tendon sheath and any previous injury of the finger(s).

What are the symptoms?
At the outset or in the initial stages of the condition, individuals may present with painless clicking with movement of the finger which may progress to painful catching or locking of the finger(s) at the joint closest to the palm or farther from the palm.

Some individuals may also have shoulder pain when the arm is raised overhead or above your head and a ‘catching’ sensation may be felt when the individual lowers his arm.

Pain which may initially be relieved by rest, for example, you may realise that the pain subsides when your fingers are not engaged in any activity.

Diagnosis
The diagnosis is made based on enquiries from your occupation, medical conditions you may have and a physical examination of the affected finger(s). During the physical examination, the individual may be required to perform movements involving the fingers to identify areas of limitations in finger movements, swollen areas of the finger joints etc.