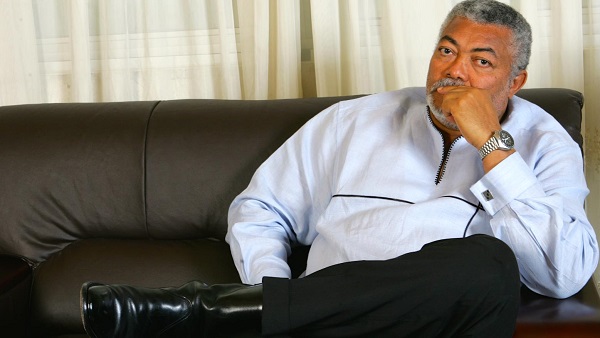 Ghana's longest-serving head of state, former President Jerry John Rawlings, passed away last Thursday at the Korle Bu Teaching Hospital in Accra after a short illness. His death came two months after that of his mother, Madam Victoria Agbotui, on September 24, 2020.

A week of national mourning has been announced in Ghana for the man who oversaw the transition to multiparty elections in what is now one of Africa's most stable democracies.

The presidential candidate of the National Democratic Congress (NDC), a party founded by former President Rawlings, Mr John Dramani Mahama, has announced that he is suspending campaigning for next month's elections.

His life
Former President Rawlings was born on June 22, 1947 in Adabraka, Accra. His late father, James Ramsey John from Scotland, worked as a chemist in the then Gold Coast, and his mother Victoria Agbotui, who passed on recently was from Dzelukope in the Volta Region and was the head of the Catering department at the State House in Accra.

He attended Achimota School, where he obtained his Ordinary Level certificate in 1966. While there, he was a member of the cadet corps and the Red Cross. Alongside compulsory co-curricular activities, Jerry Rawlings was an ardent cricketer. He was also a member of the Achimota School Choir, which performed for President Nkrumah at the Flag Staff House, Accra.

Due to his passion for flying, he enlisted as a Flight Cadet of the Ghana Air Force in August 1967 and was subsequently selected for Officer Cadet Training at the Ghana Military Academy and Training School at Teshie, Accra.

As part of his ongoing training, he was posted to the Takoradi Air Force Base in the Western Region in 1968. In January 1969, he passed out as a commissioned Fighter Pilot Officer of the Ghana Air Force and was awarded the ‘Speed Bird Trophy’ for his outstanding airmanship.

In 1992, he resigned from the military, founded the National Democratic Congress (NDC) and became the first President of the Fourth Republic. He was re-elected in 1996 for four more years. After two terms in office, the limit according to the Ghanaian Constitution, Rawlings endorsed his vice-president John Atta Mills as presidential candidate in 2000.

He was married to Nana Konadu Agyeman, whom he met while at Achimota College. They had three daughters: Zanetor Rawlings, Yaa Asantewaa Rawlings, Amina Rawlings; and a son, Kimathi Rawlings.

• The late J.J. Rawlings and his family

Tributes pouring in
Ghana's President Nana Akufo-Addo has announced seven days of national mourning. "A great tree has fallen, and Ghana is poorer for this loss," he said in a statement.

"The passion, discipline and moral strength that the former Ghanaian leader employed to reposition his country over many years continue to reverberate across the continent and beyond," he said in a statement.

• Young Kofi Owusu Nimo being helped by his mother to present books to Chairman Rawlings on behalf of the children of Ghana on August 10, 1979

Rawlings takes over the camera at the Mole ParkGhana’s First Lady, Rebecca Akufo-Addo, tweeted, “You've paid your dues to the development of this nation and your legendary status can't be questioned, R.I.P to Former President Jerry John Rawlings. Rest well till we meet again.”

Liberian President George Weah: On behalf of the government and people of the Republic of Liberia, and in my own name, I wish to convey deepest and profound sympathy to the government and the people of Ghana, the Rawlings family and the entire Africa for the death of a great statesman, Former President.....

• Former President Rawlings was accompanied by his daughter and Member of Parliament for the Klottey Korle constituency, Dr Zanetor Agyeman-Rawlings

The Chairperson of the African Union Commission, Moussa Faku Mahamat, also expressed his condolences to the family, the people and the government of Ghana in a tweet.

“I am sad to learn of the demise of President Jerry Rawlings, a good friend and great man. Let us honour him by emulating his courage and candour. J. J,Old Soldiers never die,” wrote Prof. PLO Lumumba in a Facebook post.

•  J.J. Rawlings takes over the camera at the Mole Park

In a tweet, Former UK Ambassador to Ghana, Jon Benjamin, wrote: “My deepest condolences to Nana Konadu, Zenator and all the Rawlings family.”

The family of Mr Rawlings said details of his funeral would be announced in due course.