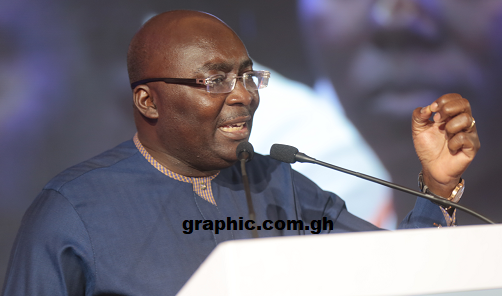 The Vice President Dr Mahamudu Bawumia has announced that Ghana will in a fortnight become the first African country to launch a universal Quick Response (QR) Code in a bid to make the country a cash-lite society.

Currently, some merchants use multiple QR codes to accept different cashless payment schemes in Ghana, however, Dr Bawumia says the code first announced in November 2019 will be inter-operable and work across various systems and platforms.

He said the QR code which will be compatible with feature phones (popularly referred to as 'yam phones' in Ghana) and smartphones will allow merchants and customers to receive non-cash payments easily without rushing to cash-out.

Dr Bawumia said the QR code will make the collection of monies at funerals, in public transport and eateries easier.

"Ghana is, of course when we launch it in two weeks time, we will be the first country in Africa to have a universal QR Code, first country.

"...It's inter-operability at the QR Code level. Of course, QR codes are here but they are not inter-operable, we are bringing in together the standards that will make it inter-operable...," he said.

Singapore launched a universal QR code in September 2018 which allowed users to scan and transfer funds from 27 e-payment apps.

The Singapore code did not support all methods of e-payment at its launch.