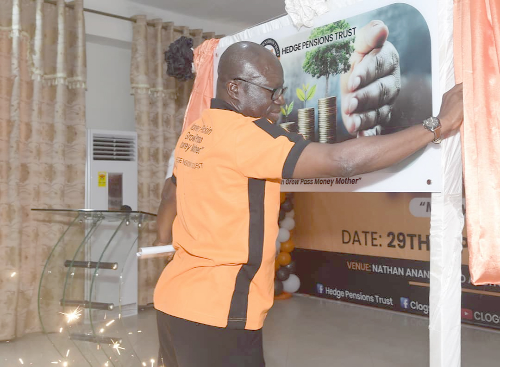 The President of Civil and Local Government Staff Association, Ghana(CLOGSAG), Dr Evans Dzikum, has asked workers to make a deliberate effort to invest part of their earnings in the voluntary Tier 3 pension scheme administered by private entities.

He said that was the surest way to what he described as a happy old age as majority of workers under the present pension scheme would be entitled to only a quarter of their current incomes during retirement.

Launching a new pensions fund by Hedge Pensions Trust (HPT) on Tuesday, September 29 in Accra, Dr Dzikum stated that the although every worker retired with the hope of enjoying a good life, some got disappointed at the end of their working life because some employers failed to pay their workers’ contributions as expected.

However, he explained that the introduction of the two new pension tiers, Tiers 2 and 3 had paved the way for employers and employees to contribute more for a better future.

Being voluntary, contributions to the Tier-3 scheme are up to the employee and employer to determine how much of the employee’s salary will be contributed to it.
One of the benefits of investing in the Tier-3 pension scheme, Dr Dzikum explained, was that “government will give tax relief on pension at retirement and also one can take his or her pension savings as a tax-free lump sum upon retirement.”

“Now is the time to save into the fund to secure the future and have a better pension life," he added.

The Chief Executive Officer (CEO) of Hedge Pension Trust, Prof Emmanuel Asiamah, stated that the current Pensions Act provided workers with the opportunity to invest by making a monthly contribution of part of their income into the “Pempamsie Fund” over ten years to make pension enjoyable.

He said the minimum age of entry was 15 years and a contributor could contribute to the voluntary fund for 10 years.

The CEO explained that contributors could enjoy a lower tax deduction as provided by law and one could contribute all 16.5 per cent or part of available funds on basic salary.

The Assistant Manager of Standards and Compliance at the National Pensions Regulatory Authority (NPRA), Mr Roland Avenyo-Addico, stated that as a regulator, the NPRA's objective was to ensure efficiency and effectiveness in service delivery and transparency in administering personal pension schemes such as Pempamsie Fund.

To drive the scheme, he said the authority would continue to encourage trustees to leverage technology, including mobile money platforms to support the expansion of pension coverage into the informal sector.

"This continuous technological advancement has radically changed how trustees conduct their businesses, transformed ways of engagement with contributors, and ultimately expanded the scope for financial inclusion," he added.