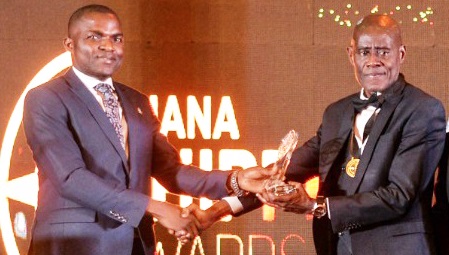 Work on a multi-purpose Atlantic Terminal project at the Takoradi Port is progressing steadily, with civil works currently about 98 per cent complete.

The Atlantic Terminal, which is the single most significant investment in the history of the Takoradi Port since its establishment, seeks to expand the port's cargo-holding capacity to one million Twenty-foot Equivalent Units (TEUs), an upscale from the average container traffic of about 55,000 TEUs a year.

The project, which is being undertaken by Ibistek Ghana, with funding from the African Finance Group and the Ghana Infrastructure Fund (GIF), marks the first time a wholly owned Ghanaian firm has been engaged in port development in the country.

Speaking to the Daily Graphic at the fifth edition of the Ghana Maritime and Shipping Industry Awards 2022, the Group Chief Executive Officer (CEO) of Ibistek, Dr Felix Nana Sackey, said the 630-metre quay walls had been completed, with the harbour basin also being dredged to about 16-metre draft to enable the facility to host bigger vessels.

He said the new facility would have storage areas, a refrigerated yard to hold cargos and warehouses to hold cargos meant for temporary export, among other facilities.

At the awards ceremony, Tacotel Limited, which is Ibistek’s first off-dock container terminal, was adjudged the Terminal Operator of the Year while Dr Sackey was recognised as the Maritime Personality of the Year.

The terminal operator category recognised a terminal operator that had achieved exceptional excellence in terminal efficiency by enhancing capacity and productivity through sustainable and consistent growth, while also providing high quality service and value additions to customers.

Tacotel, a new entrant into the port and shipping industry, commenced operations in 2017 following its development as an off-dock terminal under a concession agreement between Ibistek Ghana and the Ghana Ports and Harbours Authority (GPHA) at a cost of $69 million.

Ibistek, also through its special purpose vehicle, Marshall Oil & Gas Services Limited, presently operates a $56 million oil jetty facility with a capacity of discharging some 80,000 tonnes of oil per stream day at the port, thus phasing out the dilapidated jetty previously operated by the GPHA at a 20,000-tonne capacity.

Commenting on the award, Dr Sackey said, “This award celebrates our diligent efforts and our unwillingness to give up in the face of adversity.

“We are happy to share these moments with our valued customers and partners who have stood together with us as we unwaveringly worked towards mutual objectives.”