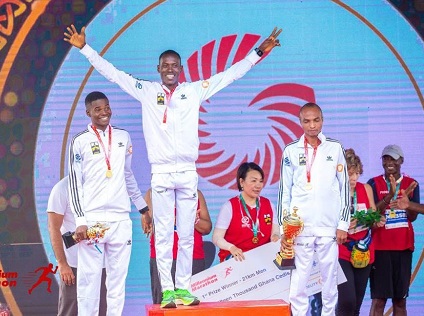 Ismael Arthur(middle) celebrates his win as he is joined on the podium by Atia Koogo (left) and Bassit Afful (right)
30.5k Shares

Ishmael Arthur from the Ghana Armed Forces emerged as the winner of this year’s Millenium Marathon with a record of 1:02:05secs.

Arthur, who won the 2018 edition of the marathon and also finished third in the 2019 edition, defied a strong field of 5,000 athletes to reclaim the title in Accra last Saturday.

His record was 46 seconds less than the previous record held by William Amponsah, who won the Sekondi-Takoradi Half Marathon in 2020 in a time of 1:02:51secs.

It was also the first time that all three male winners finished the 21km half marathon under 64 minutes.

Female winners
In the female division, Titi Rosina emerged tops with a time of 1:16:50secs, with Sarah Koomson and Sharifa Moro following in that order.

The Race Director, Mrs Catherine Morton, later thanked participants for a great show and hinted that the competition would be replicated in the other regions of the country.

The sponsors of the event included GNPC, Zonda, Fidelity Bank, Sketchers and Garmin.