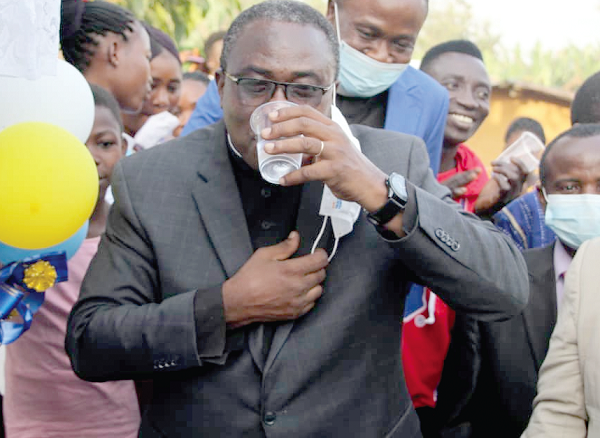 Apostle Samuel Odei Asante (drinking water from a cup), the Koforidua Area Head of the Church of Pentecost, after the inauguration. above: The new water facility.

The people of Akpo near Huhunya in the Yilo Krobo Municipality in the Eastern Region now have an electricity-powered mechanised water system after many years of deprivation.

The facility, which cost GH¢38,844, was constructed by the Koforidua Area of the Church of Pentecost as part of its corporate social responsibility.

In addition to Akpo, other nearby communities, who will rely on the water from the system, are Akpo Susie, Okper Terpurse, Akpo Sia and Akpo Akuapem.

Hitherto, these communities, with an approximate population of 2,000, depended on a polluted stream about five kilometers away called Pengua, which they shared with animals.

As a result, the inhabitants, mostly peasant farmers who cultivate plantain, cassava and cereals, contracted water-borne diseases such as bilharzia, among others.
Worst of all, the Pengua stream dried up during the dry season.

In view of the difficulties, government employees such as nurses and teachers posted to the communities had to buy sachet water from Nkurakan 15 kilometres away before they could get potable water to drink.

At a short ceremony to hand over the facility to the people at Akpo last Wednesday, the Koforidua Area Head of the Church of Pentecost, Apostle Samuel Osei Asante, said the water situation in Akpo and its surrounding communities came to the attention of the Area executives of the church through a report by the then District Pastor of Huhunya, Pastor Kofi Fofie.

According to him, based on the report, the church decided to construct the facility for the community in line with the church's vision of touching lives by providing potable water for communities where the church operated.

Apostle Asante told the gathering that the initial budget for the project had increased due to unexpected construction cost.

He stated that despite the expensive nature of the project, the church was happy that the residents of the beneficiary communities now had access to potable water.

The Koforidua Area Coordinator of the church, Pastor Seth Ofei Badu, under whose supervision the project was executed, expressed his gratitude to God for making the mechanised water system a reality, despite the challenges encountered.

He expressed the hope that the facility would positively impact lives of the beneficiary communities, especially on education and health, among others.

The Dademankye of Akpo Bunase Community, Alfred Teye Hogah, thanked the church for providing them with the new water system.

He said the intervention by the church was a divine one and the community had named the water project as "Onyame na ay3”, to wit, it is the doing of God.

He appealed to the Yilo Krobo Municipal Assembly to help lay pipes to the surrounding villages for them to also benefit from the water system.