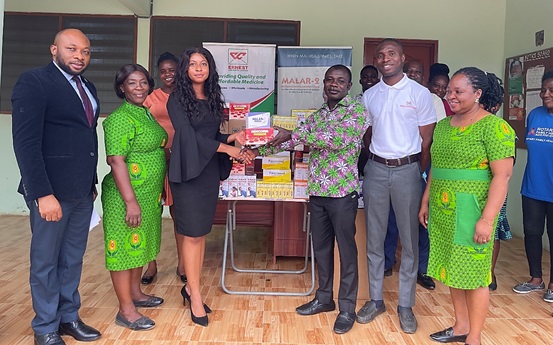 The move is to help support the directorate in the treatment of malaria in the area.

This year’s World Malaria Day is being marked under the theme: “Harness innovation to reduce the malaria disease burden and save lives.”

On behalf of Ernest Chemists Limited, Brands Communication Manager, Sharon Anim handed over the items to the health directorate.

ECL is driven by the mission to make quality medicine accessible to all, and continually demonstrates this through the donation of medications and other health products to several organizations, groups and communities.

Mrs Anim stated that, “this donation is aimed at supporting the municipality in its fight against Malaria due to its high prevalence in the area and is also timely, as the rainy season comes with an increase in reported Malaria cases”.

The medical advisor and consultant for ECL, Dr. Promise Sefogah stated that, “The Awutu Senya East Municipality was selected because, it has been reported that, Malaria remains the number one cause of OPD attendance in the municipal area. Therefore, it is appropriate to support the municipality in the fight against Malaria”.

He said, “these medications have come at the right time, as we are in the rainy season and we have recorded quite a number of malaria cases in the various health facilities in the municipality.