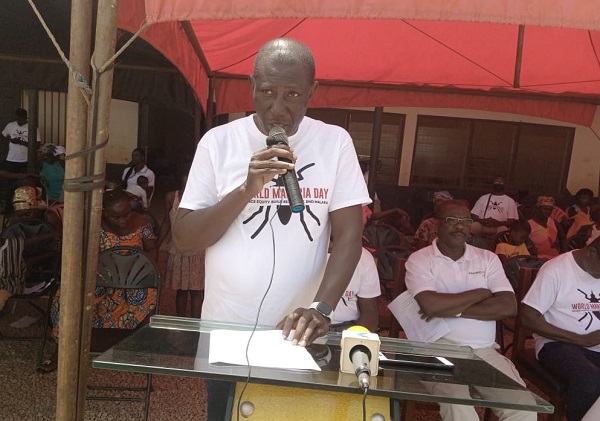 The highest number of Malaria cases in Ghana are recorded in the Volta and Western regions of Ghana. The two account for 47.4 per cent of the country's prevalence rate.

He said only the Western increased its prevalence rate marginally from 2016 to 2019 according to the Management Information System (2019) of the Ghana Health Service.

This year's commemoration was under the theme: "Advance equity, build resilience, end malaria."

Dr Nasas said health workers have stepped up the continuous national programme in the two regions with the distribution of treated mosquito nets especially for pregnant women and children while keeping an eye on its mass "reductive exercise" in the management of cases.

However, despite the devastating effects of Malaria especially in Sub-Saharan Africa, Ghana's case looks relatively promising with a drop in the death toll from malaria-related deaths from 1264 in 2016 to 308 in 2020.

That notwithstanding, health officials are calling for more collaboration to help reduce malaria morbidity and mortality and ensure that cases reported at the country's health facilities do not exceed five per cent.

The Acting General Manager of Asanko Gold Ghana mining firm, Ahmed Mohadini-Yahaya, noted that the emergence of the COVID 19 pandemic resulted in a 12 per cent rise in malaria-related mortality worldwide in 2020.

Indeed, more than 640 million cases of the disease were reported worldwide in the same year, with 627,000 deaths.

"More than two-thirds of these deaths occurred among children under the age of five in Sub Saharan Africa, "he said.

"Asanko Gold Mine has consistently undertaken numerous steps to help lessen the burden of Malaria as a firm is committed to the health of its personnel and people of our catchment community at large," he added.

In 2019, the mining firm provided every student bed in the Manso Adubia Senior High School, also within the same district, with treated nets in a bid to curb the menace.

Also in 2021, the company extended the same gesture to the Esaase Bontefufuo SHS.

The Acting General Manager announced that in collaboration with GIZ, the district health directorate in both Amansie South and West, the National Malaria Control Programme has taken some selected health workers in a refresher course aimed at preventing the menace.

Currently, Asanko Mines is supplying 2,000 treated nets to pupils in the Amansie South District with the support of the District Education Directorate.

At the programme, a full-scale clinic with a laboratory was mounted to offer free testing and treatment to affected persons.

Technical Advisor, GIZ DeveloPPP, Madam Mary Bonsu, said her outfit was poised to increase the economic and health resilience within the catchment communities of the private partner's in the mining industry.

The outfit is helping to create more awareness of the negative impact of the disease and help to fight it.

World Malaria Day is commemorated every year on April 25 and recognises global efforts to control the disease.

Globally, 3.3 billion people in 106 countries are at risk of malaria.