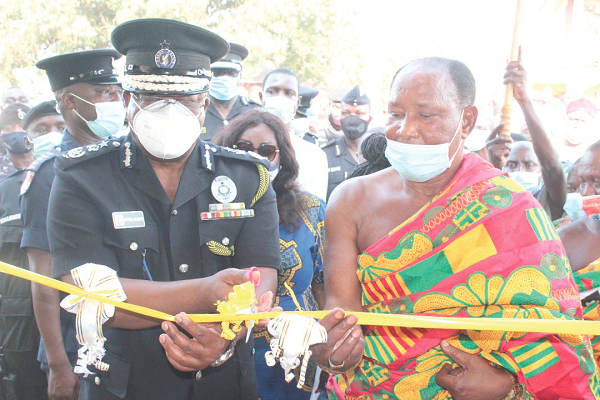 The Inspector-General of Police (IGP), Mr James Oppong-Boanuh, has inaugurated a new district police station at Yamfo in the Tano North Municipality of the Ahafo Region to serve over 50 communities.

Over the years, the town was served by a police post until the police administration decided to upgrade it to a district police station.

An old and abandoned post office building in the town was renovated and expanded to house the police station with financial support from Yamfo citizens living abroad.

At the event last Friday, the IGP said the  police administration had also decided to establish a divisional police headquarters at Yamfo and called on the chiefs and people to provide a suitable place for its construction.

Mr Oppong-Boanuh commended the chiefs and people of Yamfo for their initiative.

He expressed the hope that the establishment of the station would enable the people in the area to enjoy the peaceful atmosphere needed for them to conduct their businesses.

Addressing a durbar for the inauguration of the station, Mr Oppong-Boanuh said the police had identified hot spots in the country and would ensure that security was beefed up before, during and after the elections.

Mr Oppong-Boanuh, however, advised residents to collaborate with police officers posted to the station to ensure effective delivery.

On the December 7 general election, Mr Oppong-Boanuh reiterated the readiness of the security agencies to police the voting process and assured Ghanaians and political parties of their impartiality in the events.

He warned political thugs to stay away from the various polling stations since anything contrary would be met with the desired force in order to provide an enabling atmosphere for the successful conduct of the polls.

The Member of Parliament (MP) for Tano North, Ms Freda Prempeh, who is also the Deputy Minister of Gender, Children and Social Protection, urged the youth not to allow politicians to push them to perpetrate violence before, during and after the general election.

"Election is a contest of ideas and if we understand this, we will not be fighting," she stated.

Ms Prempeh presented a motorbike, computer and printer for the smooth running of the newly established district police station.

The Chairman of the function, Nana Ansah Adu Baah, who is also the Omanhene of Yamfo and President of the Ahafo Regional House of Chiefs, thanked the IGP for the honour done the town.

He pledged that a suitable office accommodation would be provided for the operations of the Yamfo Divisional Police Command.