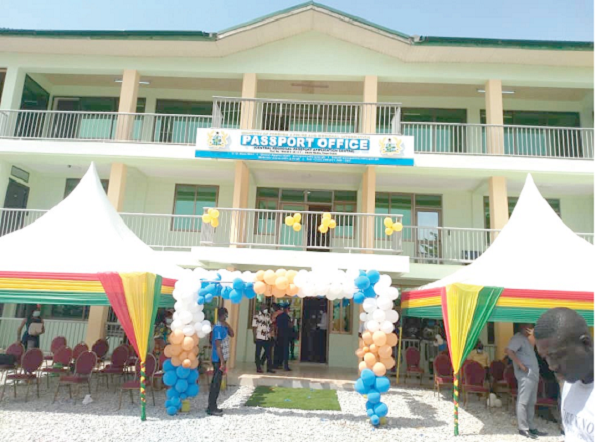 A new passport application centre has been inaugurated in Cape Coast to aid and expand the scope of passport acquisition in the Central Region.

The facility, which is the 13th passport application centre to be built in the country, will provide expedited services and eliminate the struggles of the people from having to travel to other regions to acquire passports.

At the inauguration ceremony, the Deputy Foreign Affairs and Regional Integration Minister, Mr Charles Owiredu, said the facility was one of many that had been established in the regions to expand the scope of passport acquisition in the country at large, within the government's agenda of reaching out to the grass roots.

"This is in line with President Akufo-Addo's vision of bringing passport services to the doorstep of Ghanaians and is an ample demonstration of the government's commitment to good governance through decentralisation," he stated.

He said the official opening of the centre would allow residents of the region to acquire passports with ease "without having to travel to Takoradi or Accra for such services".

The Central Regional Minister, Mr Kwamena Duncan, emphasised the significance of owning a passport, saying it was the constitutional right of every citizen and as such the acquisition process must be smooth and comfortable for the citizens.

"The passport is a citizen's constitutional right; a right must remain easy to access," he said.

He said "when a right is constituted in a manner that makes it difficult for a citizen to access, then it is as good as no right," adding that the new centre came as a great relief to the residents of the Central Region.

Mr Duncan bemoaned the concentration of all major public institutions in one region, adding that it was uncalled for not to have a regional structure that would provide the needed services to residents to ease activities.

He called for the decentralisation of the major public institutions that had been concentrated in the Greater Accra Region.

"It cannot be and must not be that although this is a complete political administrative region, it will not get an infrastructure here to provide services to the people of the region, but it will be elsewhere in another region," he said.

The Omanhen of the Oguaa Traditional Area, Osabarima Kwesi Atta II, called for professionalism on the part of staff who would be at the centre and discouraged the deployment of middlemen, popularly known as "Goro boys", saying such acts only wreaked havoc and must be avoided at all cost.

The Omanhen pledged to visit the centre on a regular basis to see if activities of the middlemen were prevalent, adding that he would back his pledge up with the law enforcers.

The Paramount Chief of the Breman Asikuma Traditional Area, Odeefo Amoakwa Boadu VIII, commended the government for extending passport application services to the Central Region, adding that the facility would be put to maximum use.

He urged residents to patronise the centre and ensure efficient maintenance of the centre for future generations.