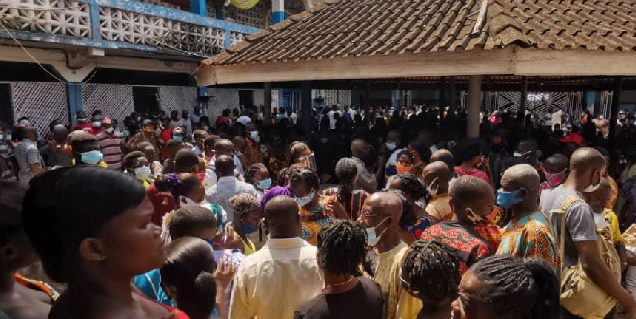 Some affected Blackshield customers at the meeting Follow @Graphicgh

Hundreds of people in the Western Region who are customers of former Gold Coast Fund Management now Blackshield, have given the government up to the end of this month to pay all their lockup investments or they would not renew its mandate in the December polls.

Many of the customers who claimed to be sympathisers of the ruling New Patriotic Party (NPP) threatened to vote against the party if government failed to pay them immediately.

What was planned to be an emergency meeting last Saturday with the national leadership of the affected customers of Gold Coast, turnout to be chaotic as customers with their voters’ identification card and the NPP Party Membership Cards thronged the venue in Takoradi demanding immediate payment.

The emergency meeting was to enable the executive explain the current government bailout position of partial package as announced by the Security and Exchange Commission’s (SEC) last week, to customers in the region, but that effort was met with anger and resistance.

The customers said they are not interested in the regulator’s cumbersome, long and difficult process, and that all they needed was their investment.

In anger, some of the customers said for almost three years, they had been pushed to challenges, unable to take care of their responsibilities towards their family.

“Our children and other members of the family go to bed with hunger basic medical care we are not able to pay for.”

As some poured out their emotions, others suddenly began chanting: “we need our money, we are here to take our money, we will not vote ooh, we are not fools.”

“To be honest, we are here for our money, we want the government to pay our money from today to the end of November. We don't want any arrangement, we need our money,” one woman said.

Some of the customers said if the government was serious about paying them, it should be now because “we know that after the elections the story would be different, we want our money now, not in December.”

The spokesperson for the Affected Gold Customers, Charles Nyame, in an interaction with the media said the reaction from members was an obvious indication that customers no longer trust the endless outlined by the SEC to pay customers and that they gave them a payment procedure that spans more than 12 or 14 working days which exceeds 20-days.