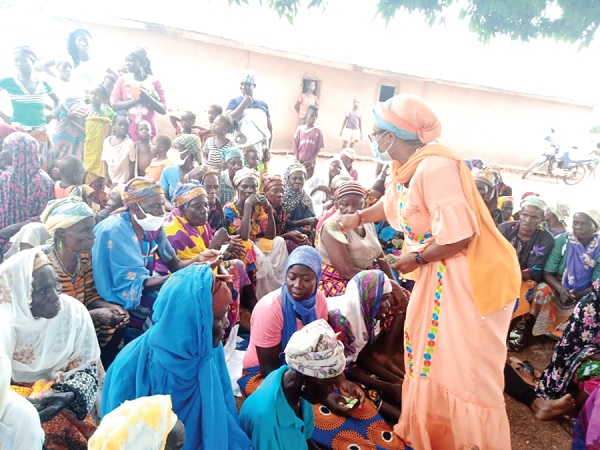 The Minister of Gender, Children and Social Protection, Mrs Cynthia Mamle Morrison, interacting with some of the people at the Gnani witches camp Follow @Graphicgh

A 50-year-old man who was accused of being a wizard over a decade ago and now resides in the Gnani alleged witches camp in the Yendi Municipality in the Northern Region says he is comfortable living there though he is able to visit his hometown without any fears.

Mr James Uninyuun Payaab from Yakpaba in the Saboba District, also in the Northern Region, who used to work as a facilitator for the School for Life, a complementary basic education programme in his community, had to relocate from his hometown, Yakpaba, to seek refuge at the Gnani alleged witches camp after he was accused of being a wizard 15 years ago.

He said he was accused of witchcraft when one of his co-facilitators passed on in 2005.

According to him, even though he was innocent and knew nothing about the death of his co-worker, his community members claimed he caused his colleague’s death and ordered him to leave the community.

Mr Payaab told The Mirror during a visit to the Gnani alleged witches camp in Yendi recently to interact with inmates of the camp to find out whether they were ready to be reintegrated into their communities should the need arise.

Echoing sentiments of his fellow inmates at the camp, he said he would not want to go back and stay permanently in his community where he was forced to live based on the witchcraft allegations.

However, he said in case the government puts measures in place for everyone at the camp to go back to their various hometowns he would be willing to go.

Currently the Gnani alleged witches camp is home to 219 people, comprising 131 females and 88 males, aged between 50 and 75 years, who have been compelled to seek refuge there based on witchcraft accusations.

Upon his arrival at the Gnani alleged witches camp, also known as Tindan community, the leaders of the community took him through a purification process by preparing some concoction for him to drink.

According to Mr Payaab, after building his own house and settling down, he decided to relocate his wife and children from Yakpaba to Tindan, and he has since been living in the alleged witches camp with his wife and eight children for about 15 years now.

He suggested that a more attractive name should be given to the place instead of "witches camp".

Mr Payaab said it was also important that after people alleged to be either witches or wizards had been there and delivered, there should be some arrangements for them to be reintegrated into their various communities.

I would be happy if the camp is dissolved but it will not be easy.

This is because the deaths cannot stop and once someone here goes back to his or her community and someone dies, there is the possibility that the person could be accused of witchcraft again", he said.

During his early days at the alleged witches camp, Mr Payaab said he decided to volunteer as a facilitator for the School for Life for the residents of the area.

He, however, decided to quit volunteering at a point because he needed more time to work on his farm to feed his family.

He said he had access to about four hectares of land where he cultivates yam, maize, rice and sometimes soybeans.

Mr Payaab said even though there was free education, he still had to give money to his children to go to school and he was faced with a lot of challenges.

He said there were children in the camp with their parents who wished to be enrolled in schools but the  parents were unable to do that because there was no basic school in the area.

He, therefore, called on the government and non-governmental organisations (NGOs) to go to their aid by providing them with a school, health facility and other social amenities to help improve their lives.

The assemblyman for Gnani Electoral Area, Mr Sandow Binangma Mark, said whenever someone was accused of witchcraft, he or she was brought to the alleged witches camp for the Tindana (priest) to purify them and accept them to be part of the community.

He said they found it difficult taking care of the inmates due to their numbers.

The assemblyman appealed to the government to initiate programmes that would help the inmates to earn some income to support their families.

The issue of accusations of witchcraft is widespread in the former Northern Region, from where the Savannah and North East regions were carved.

Currently there are four alleged witches camps in parts of the Northern and North East regions.

They are the Gnani, Kpatinga and Kukuo witches camps in the Yendi, Gushegu municipalities and Nanumba South district respectively, with that of Gambaga in the East Mamprusi Municipality considered as the oldest.

In December 2014, the government in partnership with some NGOs closed down the Bonyase alleged witches camp in the Central Gonja District now in the Savannah Region and the most recent one at Nabuli, also in the Gushegu Municipality.