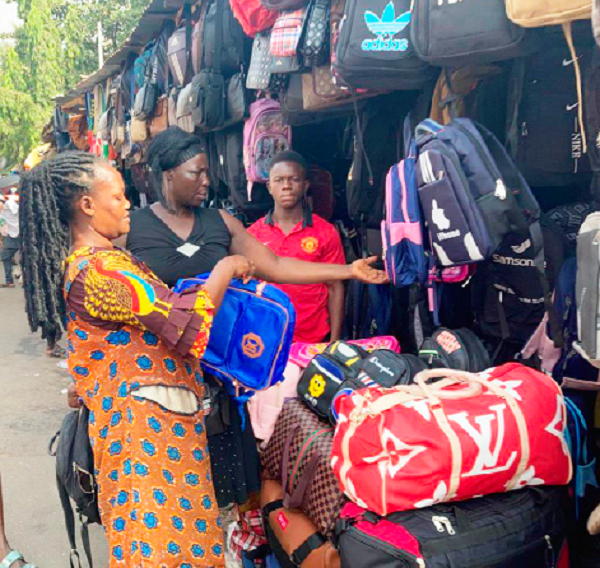 Christmas is over and now parents and guardians have veered into the shopping of wares for their children and wards as school reopens.

Last Friday, a public holiday; and Saturday, one could easily spot parents, and, in some instances, with their children, shopping at the commercial area in Kumasi.

They were mostly buying school uniforms, shoes and school bags as they prepared their children for this academic year.

Most schools, especially the basic ones in the metropolis, are expected to reopen school starting from today (January 11 ,2022).

Although Christmas wares have been reduced to clear, commodities including school uniforms, schools bags and sandals were on high demand, and prices had subsequently been increased.

At a wholesale shop in Adum, a brand-new school bag for “my first day at school” kids, which was sold at GH¢20 is now GH¢ 35 while it is being retailed between GH¢45 and GH¢50.

A parent who only gave his name as Mr Asante expressed surprise at the increment of prices of school items on the market.

He said his second child would start kindergarten on Monday, January 17, and, therefore, came to town to buy some items and wondered why prices had shot up all of a sudden

“Last two years, I bought this school bag for my first child at GH¢20, but the same kindergarten school bag is now being sold at GH¢45,” he said.

“Business is good,” a trader told this reporter at the KO Market, near the new Kejetia Market in Kumasi, when the Daily Graphic news team visited the central business district (CBD) area last Saturday to find out how business was going after the Christmas holidays. 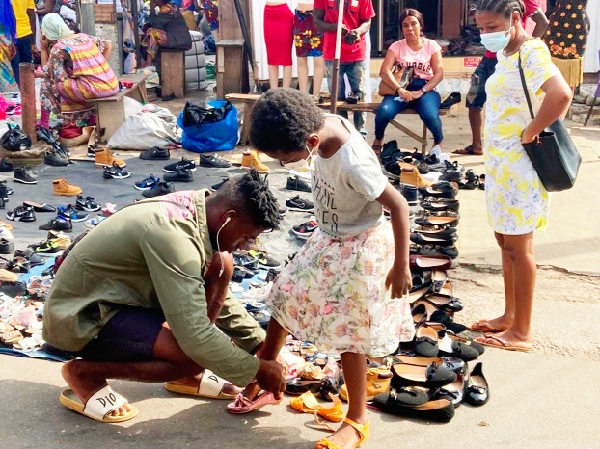 A parent (right) looks on while her daughter tries on sandals she wanted to buy at Adum in Kumasi. Pictures: EMMANUEL BAAH

He said he had enough stock of school items including bags and stationery for children, and that patronage had so far been good.

In Accra, the situation was the same as parents were spotted within the CBD buying school items for their children.

The Kantamanto, the Rawlings Park and Makola areas recorded a lot of activities as people moved around to buy the items on their shopping list for school that included underwears, school shoes, school bags, books and snacks, mainly soft drinks and biscuits.

Nana Tiwaa Dompreh, a parent, told the Daily Graphic that she planned her shopping in a way that she would not be overburdened.

“Earlier in the week, I came to town to buy items for my son in senior high school (SHS) who had since gone back to school and I have returned today to shop for my twins who are also going to junior high school (JHS) form One.

“Financially, we planned because we knew we would have to get the items, so we are ready," Mrs Dompreh said as she tried to get new pairs of black shoes for her twins — a boy and a girl.