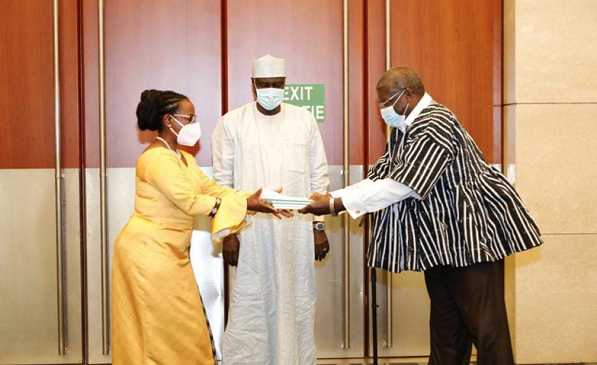 The immediate past Deputy Chairperson of the African Union Commission (AUC), Mr Kwesi Quartey, has observed that ongoing reforms at the commission will make the organisation more fit for purpose to prosecute the Agenda 2063 aimed at delivering an inclusive and sustainable development of the continent.

He added that further reforms which were still ongoing on a new quota system developed for the commission, and the adoption of a new scale of assessment, among a number of initiatives introduced under his tenure, would make the commission even stronger.

During a farewell call on the President of Ethiopia, Ms Sahle-Work Zewde, at her office in Addis Ababa after his duty tour of the commission, Mr Quartey maintained that education, science, technology, as well as planning and coordination, would be the driving forces for the sustainable development across the continent.

The meeting was also availed to the media via the Zoom platform.

He became the first-ever Ghanaian public official to have been elected to the position since the formation of the AU, previously called the Organisation of African Unity (OAU).

During his time as Deputy Chairperson, Mr Quartey was in charge of Finance and Administration.

His tenure also saw him chairing and coordinating the effort of member states, AU agencies, the World Health Organisation (WHO) and other partners to respond to the existential threat of the Covid-19 pandemic.

Among the key achievements of the commission during his tenure was the coming into force of the African Continental Free Trade Area (AfCFTA), which was designed to drive the continent’s development into one common market for the free flow of capital, goods and services within the continent.

“The AfCFTA is capable of creating an integrated market of over 1.2 billion people with a potential value of $3 to $4 trillion, an acknowledged game changer.

“The AfCFTA should be a driving force for the continent’s competitiveness in improving the quality of life for the people and ensuring Africa becomes a more effective player in the global space,” Mr Quartey said.

He commended Ghana’s political leadership for working against the odds in the management of the COVID-19 situation in the country.

“We have been compelled, as Africans, to further prioritise our exertions and operate a more coordinated and effective response to this pandemic and its socio-economic consequences, and President Akufo-Addo deserves commendation for the exploits,” he said.

He said Ghana’s leadership had shown resilience and proved equal to the task during the challenging times when the pandemic brought untold hardships to many people on the continent.

Mr Quartey added that ongoing reforms on a new quota system developed for the commission and the adoption of a new scale of assessment, among a number of initiatives introduced under his tenure, were successful because of the support he received from President Akufo-Addo.

“I owe President Akufo-Addo a profound debt of gratitude for the honour and a privilege of being the first-ever Ghanaian public servant to have served the African Union in the position,” Mr Quartey said.