The Hungarian government has conferred on the international evangelist, Rev. Dr Lawrence Tetteh, the Knight Cross of the Order of Merit for his contribution towards strengthening the ties between Hungary and Ghana.

It was well attended by Rev. Dr Tetteh’s family and friends, government officials, members of the Diplomatic Corps, the business community, traditional rulers and some religious leaders.

Rev. Dr Tetteh is the Founder and President of the Worldwide Miracle Outreach.

He is an economist, international evangelist, teacher of the Gospel and author of many books. 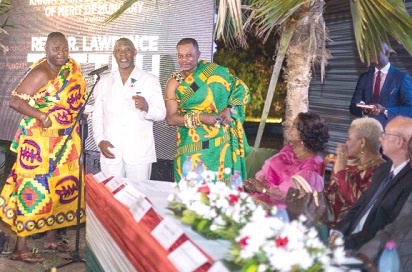 He is an alumnus of the University of Hungary and currently the International Coordinator of the Ghana-Hungarian Friendship Association and Special Advisor to the Hungarian-African Knowledge Centre.

The Hungarian Ambassador to Ghana, Tamás Fehér, while conferring the honour on Rev. Dr Tetteh, said March 15 was one of the three national days of Hungary which the government used to confer decorations on Hungarians and foreigners whose contributions to the people of Hungary were outstanding.

For the first time since the reopening of the embassy in Ghana, he said, the Hungarian government had conferred awards on two Ghanaians, including Rev. Dr Tetteh.

“He’s a household name in Hungary and his life and achievements deserve our attention,” Mr Fehér said.

Rev. Dr Tetteh extended his appreciation to the Hungarian government for bestowing on him such an honour.

Recounting his struggles from childhood as the eldest among nine siblings, he said he had no option but fight and try anything possible to ensure success in life.

“I had to do it, and today not even one single child from my mother has not studied and completed university in Hungary,” he said.
“The secret is that I found a man, and through the connection I had with that man, who is Jesus Christ, many doors opened. I studied as an economist and I did international relations. How I ended up at the London School of Economics itself is a miracle,” he added.

While studying in Hungary, he said, he was one of the few students who had the chance to serve as President of the International Community of the Eastern European Bloc.

“One thing I keep saying is that if you keep quiet and do what you do best, people will recognise you in the end. Let’s fear God and keep His commandments and doors will open for us,” Rev. Dr Tetteh added.

Former President Kufuor commended Rev. Dr Tetteh for his enormous contributions to the bilateral relations between Ghana and Hungary.

Walking down memory lane, the former President said he knew Rev. Dr Tetteh a year before the latter entered into ministry.

He said one thing he noticed about Rev. Dr Tetteh during that time was his kind-heartedness and willingness to help people.

“I was surprised when he came to inform me that the Hungarian government wanted to honour him, but it later dawned on me that it could be because of his kind-heartedness, which has helped to enhance the bond between our two countries,” former President Kufuor said.