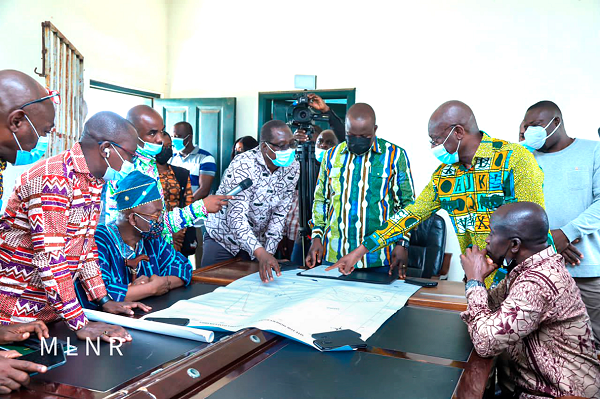 The Minister of Lands and Natural Resources, Mr Samuel Abu Jinapor, has directed the Lands Commission to fast-track legal processes for the release of portions of the state land at Amrahia in the La Nkwantanang Madina Municipal Assembly (LANMA) to the Ministry of Works and Housing for an affordable housing project.

The government acquired the 1,381-acre plot at Amrahia which currently hosts Diary Farms.

However, there is a roadmap to release 40 per cent of the land to the chiefs and families in the area in lieu of compensation as required by law.

When the plan is followed through, 552 acres of land will be released to the Amrahia families, leaving 829 acres for the government.

For that to happen, the Lands Commission will have to complete engagement with the chiefs and submit the proposal to the President for a new Executive Instrument (EI) to be issued on the land.

Mr Jinapor, who is on a two-day tour of the Greater Accra Region, asked the acting Executive Director of the Lands Commission, Mr James Dadson, to double up efforts to bring closure to the issue to pave the way for portions of the land to be alloted to the Works and Housing Ministry for the housing project.

He said the decision to give out part of the state lands for the affordable housing project was because of the move by the government to address the country's housing deficit, said to be currently more than two million units.

Additionally, he said, once there was closure to the compensation issues, Nungua Farms, a poultry farm, would be relocated to the Amrahia enclave.

He also called for the Chief of Amrahia and other allied villages to work together to prevent any form of land litigation or misunderstanding which could jeopardise the efforts.

The Technical Advisor of Lands at the ministry, Mr Maxwell Nsarfoa, gave the assurance that by the end of the year, all the technical discussions on the land demarcation would be concluded to ensure that the land was put to productive use.

He said the engagement with the chiefs had been fruitful and that should it go smoothly as they were currently, the process would be completed by December.

Mr Nsarfoa called on the people of Amrahia to stay away from the land.

The Amrahia state lands were acquired in the1960s mainly for agricultural and dairy purposes.

However, the limited investment on it has left most parts of the land to lie fallow with encroachers said to have stolen parts of the property.

There was an on-site demolition of some buildings that had been erected beyond the boundary belt built to protect the land.