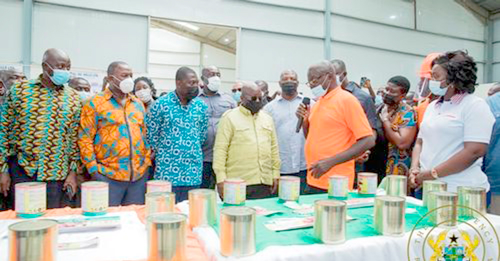 Rehabilitation, expansion and construction works on a wholly Ghanaian-owned agro-processing company, Central Oil Mills Limited, in the Hemang Lower Denkyira District in the Central Region under the ‘One district, one factory’ (1D1F) programme is near completion.

This is as a result of an investment support of GH¢14 million received from the Ghana Export-Import (EXIM) Bank under the 1D1F programme.

The new factory at Asamanso and the expansion work at Mfuom are about 95 per cent and 90 per cent complete, and are both expected to be fully completed by

These came to light when President Nana Addo Dankwa Akufo-Addo visited the company last Tuesday as part of his two-day tour of the Central Region.

Located at Jukwa-Mfuom and Jukwa-Ansamanso, Central Oil Mills Limited, which is into oil palm development and palm oil processing, has embarked on an

expansion programme and building of value addition facilities at its factory sites.

including the rehabilitation and expansion of an existing factory at Jukwa-Mfuom.

The loan was also to aid in the establishment of a brand new secondary value-addition oil palm processing factory at Jukwa-Asamanso, with the capacity to

process vegetables, including canned and bottled products as well as expand and develop oil palm plantation.

The Chief Executive Officer of the company, Mr Aaron Sagoe, said the project involved the expansion of an existing oil palm mill with an initial capacity of 2,400

the capacity to do double shift.

With a yield of 20 per cent, he said that would produce 2,400 metric tonnes of palm oil per annum, which could be processed into secondary canned and bottled

Again, he said with support from the 1D1F programme, the company had increased its storage capacity from 30 metric tonnes to 150 metric tonnes.

Earlier, President Akufo-Addo cut the sod for the construction of a 12.1 kilometre Twifo Hemang-Nsutem road as part of his tour of the Central Region.

The GH¢31 million project being undertaken by Pergus Houston Engineering Limited would be completed in 24 months.

The project on completion would provide access to farms, schools and other facilities and open the district up for socio-economic activities by significantly

During a courtesy call on the Omanhene of Twifo Hemang,Otumfuo Amoah Sasraku IV President Akufo-Addo said the government would continuously improve

the state of roads in the country.