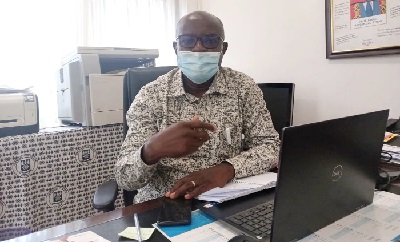 Professor Kwasi Appeaning-Addo, Director of the Institute of Environmental and Sanitation Studies (IESS) of the University of Ghana
30.5k Shares

The Director of the Institute of Environmental and Sanitation Studies (IESS) of the University of Ghana, Professor Kwasi Appeaning-Addo, has called for immediate steps to be taken to halt development activities along the country’s coastline.

He said encroachment of Ghana’s 540-kilometre coastline by sand winners, estate developers and human settlements had disrupted the natural ecosystem and aggravated the risk of coastal flooding.

In an interview with the Daily Graphic, Prof. Appeaning-Addo, also, said the government must take a bold decision to relocate communities that were very close to the seashore and risked being wiped away by tidal waves.

The interview with Prof. Appeaning-Addo was informed by the increasing incidence of coastal erosion and displacement of some residents of communities along the coast.

In spite of the ban on sand winning along the coast, the estate developers continue to engage in the illegality along the eastern coastline, which covers about 149km - stretching from Aflao, Ghana’s border with Togo in the east, to the Laloi Lagoon, west of Prampram in the Greater Accra Region.

The western coastline, which stretches from Ghana’s border with Cote d’Ivoire to a little beyond Cape Coast in the Central Region, has also seen some encroachment activities, leading to coastal erosion.

Such is the case with the central coastline that runs from Cape Coast to around the Prampram area in the Greater Accra Region.

In some cases, people mould blocks along the beaches for economic gain.

Experts say the conspiracy between human activities and rising sea levels as a result of climate change, had accounted for the increasing incidence of sea erosion and coastal flooding in coastal communities.

In 2015 and 2022, ravaging sea waves destroyed 56 houses in the Keta Municipality, leaving 627 people in communities such as Dzita and Fuveme homeless.

A year later, hundreds of residents of Fuveme, Kporkporgbor, Whuti, Srogboe, Dzita and Agbledomi communities were displaced when tidal waves revisited the area. Farmlands and properties running into thousands of Ghana cedis were also destroyed.

In November 2021, the perennial disaster hit the Keta Municipality again, displacing about 3000 people in communities such as Abutiakope, Kedzikope and Keta Central.

Some residents of Atiteti Electoral Area in the Anloga District in the Volta Region told the Daily Graphic that perennial coastal flooding had destroyed their communities and taken away their livelihoods.

Forty-three-year old Raphael Agbenu said after losing their livelihoods to the perennial tidal waves, the residents of Atiteti lived in abject poverty.

"Husbands can no longer go to sea because they have no money for fuel, and when they go, they return with bad catch.

This has affected women and children who also depend on them for a livelihood," Raphael added.

Another resident of the area, Knowledge Wisdom Dewornu, said ever since his family was displaced from Fuvume, they only survived by the grace of God

"I wake up every day thinking about how I will get food for my family. Women and children are suffering more here," he said.

Touching on the issue, Prof. Appeaning-Addo explained that while climate change had accounted for rising sea levels, violent currents and sea surges, these human activities had further fueled coastal erosion and flooding.

He said the communities along the eastern coastline were under serious threat of coastal flooding because they were naturally low-lying.

The ocean specialist said one of the best ways of addressing the problem of coastal erosion was to relocate the communities so that the natural environment could be rebuilt.

He said the construction of sea defence wall as an intervention to curb coastal flooding had proven to be ineffective and was not the ideal thing to do.

“From where I sit, we can manage coastal flooding with nature-based solutions.

It does not give rapid and immediate results, but it gives long-term solution.

It could be expensive, but it will give the needed results," he observed.

Prof. Appeaning-Addo said the hybrid system was, particularly, appropriate for areas where it was extremely difficult to have nature-based solutions.

"If it is possible to replant mangroves and create that environment, let us do it; if bringing sediments from the ocean to nourish the area and allowing it to evolve, let us do it.

"But if it is extremely difficult, based on science, that we cannot plant mangroves or coconut because of the conditions there, then we can get a structure to hold the waves and begin to gradually push it in and allow the natural process to recreate," the IESS director added.

Again, he stressed that solutions to the natural disaster should not be sought on the back of political motive as such knee-jerk measures had the potential to create more problems.

The seasoned coastal researcher further underscored the need to pump in resources and train people to be doing constant monitoring so that we could understand the dynamics within the coastal ecosystem and take appropriate steps to address it.