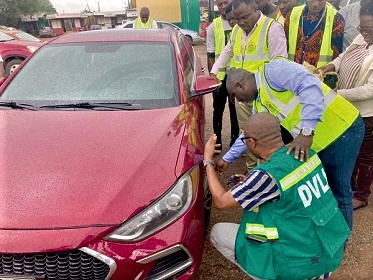 The Driver and Vehicle Licensing Authority (DVLA) has introduced some five key digital appliances in its operations to ensure a regulated framework for an enhanced and a more effective supervision of drivers and vehicles.

Obuasi station is the first to take delivery of the hand-held tools, while all 32 district offices across the country are to receive the kits for effective operations.

The DVLA says the appliances will help detect approved tinted windscreens, test the brake efficiency of a vehicle, and get instant access to a driver’s particulars upon keying in their registration and certificate of competence numbers to establish the authenticity or otherwise.

In the past, most driver offenders were let off the hook because the authority lacked these standard gadgets to strengthen their checks on the road.

The Compliance and Enforcement Manager of DVLA, Richard Kwasi Eyiah, explained that “after all checks are carried out on a vehicle, an automated gadget instantly issues out a receipt to the driver to know the status of the car as to whether it passed the test or not”.

The Appliance and Enforcement Unit of the DVLA, last Thursday (September 29), organised a brief demonstration of the tools to the media in Kumasi and later moved on to the streets to test their innovative kits on drivers and vehicles.

During the field demonstration, it was detected that some vehicles had issues, but no arrests were made.

However, the DVLA field officers urged the drivers to update their papers, as well as put their vehicles in shape in order not to fall foul of the law.

Mr Eyiah in a post-test run interview said the tools would be used effectively to ensure compliance on the roads to ensure maximum safety on the roads with only roadworthy vehicles.

“Road rules will only be obeyed if drivers are made aware that not obeying them would result in detection and unwanted outcomes such as fines or licence suspension or cancellation.

“With these gadgets, there will be no hiding place for recalcitrant drivers,” he emphasised.

Mr Eyiah used the opportunity to commend the government for resourcing the authority which had enabled it to play its role more efficiently.