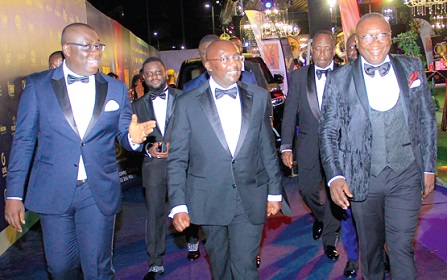 The Vice-President, Dr Mahamudu Bawumia, has urged winners of the Exclusive Men of the Year (EMY) awards to positively influence society by mentoring young people.

He was of the opinion that by taking on the duty of providing a platform for mentorship to the young generation, they would be able to mould their future and lay a strong foundation for them to prosper and take on leadership roles in future.

Dr Bawumia made the call at the Seventh Edition of the EMY Awards in Accra last Saturday.

"I implore everyone who has been recognised for their outstanding contributions to our society to keep up their responsibilities as mentors to the next generation so that we can create a healthy society based on hard work and sound principles."

The Vice-President was pleased with the awards selection process, praising their strictness and transparency.

Winners on the night

Other winners were Group of the Year- Rotary Club of Ghana, Continental Music Icon of the Year- Don Jazzy, Lifetime Achievement Award- Joe Lartey, and the ultimate winner on the night Man of the Year was Ibrahim Mahama.

Speaking to the Daily Graphic, Mr Mahama said he felt honoured to have emerged Man of the Year adding that would urge him to even work harder.

“ I am very happy to win the highest award on the night, Man of the Year. In fact, the journey has not been easy, but winning this award will spur me on to do more. But I want to urge the young ones that what I have done they can do better” he said.

The event started at 9 p.m. with a performance from South African singer, Zahara, who did exceptionally well entertaining the awardees, industry players, guests and high profile people who made it to the event.

There were other great performances from the likes of Kwabena Kwabena, Efe Grace and Akwaboah.

Since 2015, EMY Africa has celebrated the best in men’s achievements across local industry, community, culture and public service. Dozens of men from all ages and walks of life have been honoured for their abilities, initiatives and contributions to society.