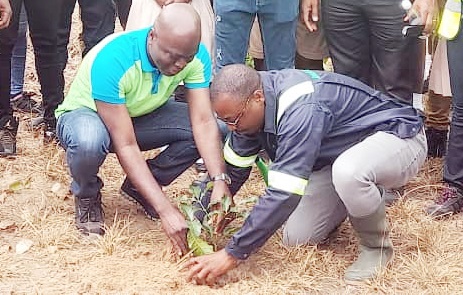 The Bui Power Authority (BPA) has since 2012 planted trees to cover a total of 423.67 acres of land to promote the conservation of the natural forest within the Bui Power Station and other BPA operational areas.

In addition, the authority is set to establish a 1,000-acre tree plantation to enhance the ecosystem and combat climate change within the Bui enclave.

The cultivation of the tree plantations is being undertaken under the authority's Forest Resources Enhancement Programme (FREP).

This came to light when the staff of the authority led students, journalists and some members of communities near the Bui Power Station to plant trees to commemorate Green Ghana Day last Friday.

The Deputy Director, Occupational Health, Safety and Environment of BPA, Chrisentus Kuunfaa, told journalists that the FREP had been designed to mitigate the effects of climate change.

He explained that several hectares of gallery and savannah woodlots were being religiously conserved within the Bui enclave.

"It is interesting to note that a total of 26 different economic, indigenous and domesticated tree species have been identified for protection,” he said.

Mr Kuunfaa said the FREP had proven to be a good initiative since it had promoted corporate environmental governance on climate change mitigation and adaptation.

He said in pursuance of the BPA Act, 2007 (Act 740) and its Amendment Act 2020 (Act 1046), the authority had a greater commitment towards the protection of the environment and combating the menace of climate change.

To complement the government’s bid to plant 20 million trees this year, Mr Kuunfaa said the BPA would cultivate 20,000 species of different trees.

Mr Kuunfaa said the BPA would partner with the Ghana Education Service (GES) to establish environmental clubs in selected schools to embark on woodlots establishment and encourage conservation practices.

For his part, the BPA Director of Estates, Wumbilla Salifu, said as renewal energy leaders in the sub-region, BPA was conscious of the impact climate change played in hydropower generation.

He explained that the water sector in Ghana was the area that was impacted by climatic change.

Mr Salifu, therefore, reminded policymakers, planners and water sector managers that they could no longer rely on the past climatic conditions; he, therefore, called for the building of climate resilience now and in the future.

To mark the Green Ghana Day, students from the BPA JHS and the Jama JHS, officials of BPA and other institutions planted seedlings of various tree species on a large depleted land.