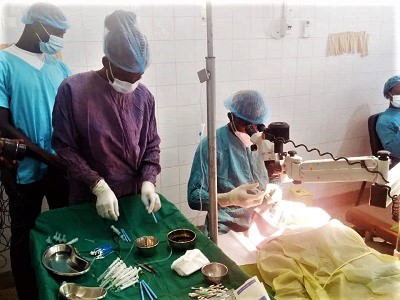 Three hundred residents in the Bawku West District in the Upper East Region have benefitted from free cataract surgery.

The beneficiaries, who went through the surgery sponsored by Haven of Love Children’s Foundation, a local Christian non-governmental organisation at the Zebilla District Hospital, were drawn from Tanga, Binaba, Boya, Tilli, Sapeliga, Teshie and Zebilla.

The surgery was a follow-up to an earlier eye screening exercise held by the NGO, during which some residents with various eye problems were identified and scheduled to benefit from the surgery to restore their sight.

The five-day exercise was carried out by the Upper East Regional Ophthalmologist, Dr Lordson Dagba, who was supported by Dr Joyce Tweh of the Manhyia District Hospital in Kumasi.

Speaking to the Daily Graphic after the exercise, the Founder of the NGO, Samuel Nana Bekai Djirackor, said “300 residents out of a total of 1,000 who benefitted from the eye screening had some serious eye conditions which when not taken through surgery urgently, will affect their vision”.

He stressed, “we believe that the surgery will go a long way to enhance the movement of some of the beneficiaries, some of whom had become immobile and could not engage in any economic activity due to their poor vision.”

Touching on the rationale behind the exercise, he said the foundation was focused on the love of Jesus Christ which must always be practicalised and not just by word of mouth, adding, “by this gesture, we are giving true meaning to God’s love by practically supporting the under-privileged to fully gain their sight.”

Mr Djirackor cautioned the residents to desist from self-medication when they have challenges with their eyes, as it had the tendency of putting them at high risk of contracting all manner of eye diseases.

For his part, Dr Dagba said poor vision was normally associated with elderly people and that persons with such conditions should seek immediate eye care. “If people with poor vision resort to other forms of medication other than proper medical care, it often becomes too late to handle such conditions. It is, therefore, advisable that everybody with poor vision at any point in his or her life seeks proper eye care, instead of resorting to medication that will worsen the condition,” he said.

He lamented inadequate comprehensive eye care in the region due to the deficient number of specialist health professionals in eye care, saying, “even if residents with eye conditions are identified, there are not enough eye specialists to attend to them.”

Some of the beneficiaries interviewed commended the NGO for fulfilling their promise to improve their sight through surgery after they had earlier benefitted from a free eye screening exercise.

A resident of Tanga, Sampson Atubiga, and a trader, Mbugre Awini, said, “we can now engage in our farming and trading activities after successfully going through the surgery process.”