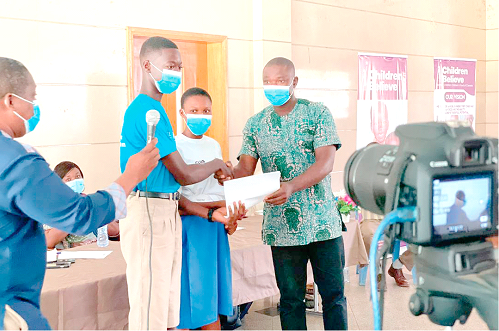 Leaders of the Child-Friendly Accountability Mechanism Club presenting a copy of the communique they read at the forum to Mr Iddrisu Sandey (right), Northern Regional Director of the Department of Children, Ministry of Gender, Children and Social Protection
30.5k Shares

Some children in the Northern Region have appealed to which ever political party that will form the next government to prioritise issues concerning children such as education, child protection, healthcare and livelihoods.

The children, numbering over 100, who made the call at the maiden edition of the Child-Friendly Accountability Regional Forum are made up students and pupils of basic schools in 13 communities in the Sagnarigu and Nanumba North Municipalities in the Northern Region.

They appealed to all voters to treat as being very important the welfare of children when voting because children in Ghana want to continue to live in a safe country before, during and after election 2020.

“We want to return to school and continue to learn after the elections and we wish to remind all duty bearers, especially the security agencies and all political actors, that Ghana must be the winner in the 2020 elections because when Ghana wins children win, and when children win, Ghana will prosper and develop now and in the future”, they stated.

It is to empower children to meaningfully participate in making certain that those charged with protecting and fulfilling children’s rights do what they are supposed to do in accordance with their obligations under international human rights law and if they do not or cannot, that children and their representatives have some recourse.

Present at the maiden forum were representatives of duty bearers from the departments of children and women under the Ministry of Gender, Children and Social Protection, National Commission for Civic Education (NCCE), local government authorities, traditional authorities and the various political parties.

A communiqué that touches on the concerns of children in the area of education, healthcare, child protection and livelihoods was read on their behalf at the forum by Kingsley Kpenye and Priscilla Abbe, leaders of the Child-Friendly Accountability Mechanism Club of the Kanvilli Roman Catholic and Zagyuri Anglican schools respectively.

Earlier in her welcome address, the country manager of Children Believe, Mrs Esenam Kavi De Souza, said the Child-Friendly Accountability Mechanism (CRAM) initiative was to build the agency of children and their communities in monitoring the performance and accountability in child protection systems as part of commitment towards attaining Sustainable Development Goal (SDG) target 16.2 to end all forms of violence against children.

The Northern Regional Director of the Department of Children, Mr Iddrisu Sandey, who received the communiqué read by the children at the forum on behalf the duty bearers, urged the children to continue to be responsible while they demanded their rights from the society, especially duty bearers to create safe and conducive environment for them to grow and realise thier potentials.