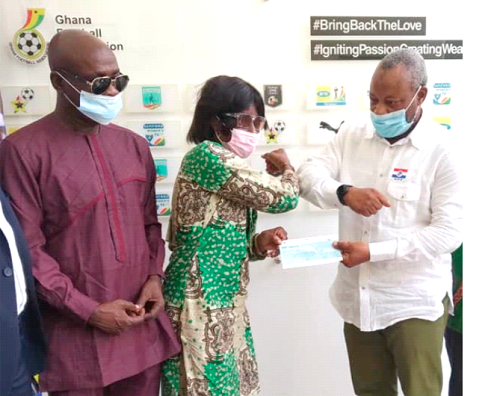 The Ministry of Youth and Sports (MOYS) has presented a cheque for GH¢1 million to the Ghana Football Association (GFA) as the first tranche of a special government package to offset the expenses incurred by the 18 Ghana Premier League clubs for playing matches behind closed doors.

At a ceremony to hand over the cheque at the Ghana Football Association (GFA) Secretariat in Accra yesterday, a Communications Consultant of the MOYS, Mr Ahmed Osman Halid, said the financial assistance followed an appeal made to President Nana Addo Dankwa Akufo-Addo by the GFA after the ministry’s directive for all games to be played behind closed doors.

He explained that GH¢900,000 out of the total sum was to be disbursed, with each club receiving GH¢50,000, while the remaining GH¢100,000 was to be used by the GFA for its administrative expenses.

"After the Ministry of Youth and Sports directive that all games be played behind closed doors, the FA through its president, General Secretary and other Executive Council (ExCo) members, had an engagement with the minister, and said the ministry or government should find a way of supporting the clubs to meet their expenses," Mr Halid revealed.

"The engagement went on very fine and the government has agreed to assist the clubs and when we say all the clubs, we mean the Ghana Premier League clubs, the National Women's League (NWL) clubs, the Division One League (DOL) clubs and the country's representatives in the Confederation of African Football's (CAF) inter-club club competitions."

He said the ministry would in the coming weeks make similar presentations to the other beneficiaries, including the members of the NWL, DOL and the CAF inter-club representatives.