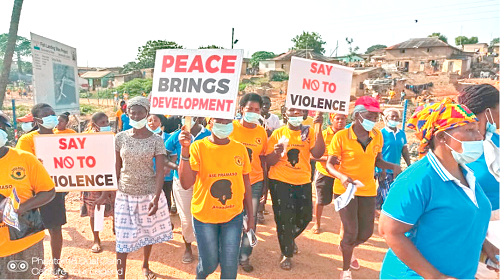 Some of the women on the peace walk
30.5k Shares

With a few days to the election, there has come the need to intensify the gospel of peace to ensure Ghanaians, especially young people, stay away from every form of electoral violence.

Several groups and institutions are stressing on this need.

The women of Senya Beraku in the Central Region have added their voice to the call.

The women, on Saturday, 21st November, 2020, under the Ase Pramaso Women's Movement, organised a peace forum and went on a peace walk through the principal streets of Senya Beraku, holding placards to sound the message of peace.

The movement was founded by Rev. Mother Aba Folson, the CEO of Nyaniba Health College, to empower women and raise the feminine voice and energy for community development.

Some of their messages included, "Say no to violence', "We have only one Ghana", "Peace before, during and after the election", "Think about your mothers", among others. The walk was partnered by representatives from the Awutu Senya District Youth Parliament.

The President of the women's movement, Rev. Mother Aba Folson, used the occasion to recount her experience and that of her mother at Liberia during the civil war which destroyed several lives and property, and reversed the destinies of countless young people.

She, therefore, called upon the youth to desist from all forms of violence, uphold the integrity of the elections by staying away from electoral violence induced activities just for the sake of their political parties at the detriment of the peace Ghana was enjoying.

She also admonished women to continually “keep sounding the siren” for peace in their homes and in the communities because, in the event of any violence, women and children were the most affected.

The Speaker of the Awutu Senya Youth Parliament, Apostle Abeiku Okai, called on the youth to focus on contributing to the consolidation of the democratic gains, peace and development.