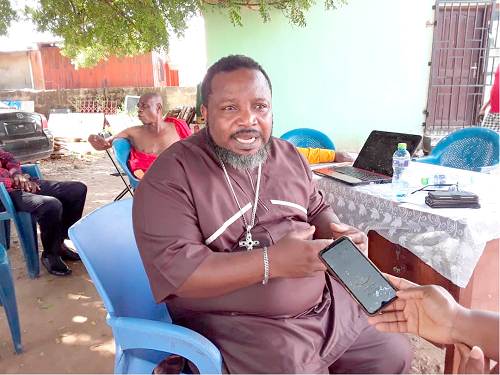 A member of the Mbewe Okley Otu of the Odoitso Odoi Kwao Family at Baatso, Reverend Victor Mi-Laryea, has called on the Inspector General of Police to, as a matter of urgency, investigate alleged threat on his life by some police personnel.

According to him, on November 5, 2020, the personnel on board a police patrol vehicle with registration number GP-4646 threatened to kill him in the presence of two officers of the Sakumono police station who had accompanied him to check on the encroachment of a family land around the Regional Maritime University at Nungua.

He said those who threatened him warned him not to set foot on the family land, otherwise they would be compelled to effect the threat.

Addressing the press on the issue at Baatsona, Rev. Mi-Laryea said he had reported the matter to the Baatsona police, Manet police, Tema police, Nungua police and the Police Intelligence and Professional Standard Bureau (PIPS), but nothing had been done about the matter.

“That is why I am appealing to the IGP and the President, through the media, to intervene”, he said.

Rev. Mi-Laryea, who is the founder of the Daiden Royal Ministry, noted that the issue had to do with a 14-acre plot bequeathed to the Mbewe Okley Otu Odoitso Odio Kwao Family.

He noted that a police patrol team has been dispatched to the land “to prevent us from going to our own land. I mean how can this happen in such a free and democratic country as ours, where law and order are adhered to?”

A search, he said, conducted by the police at the Lands Commission (documents available), had indicated that the parcel of land belonged to the family.