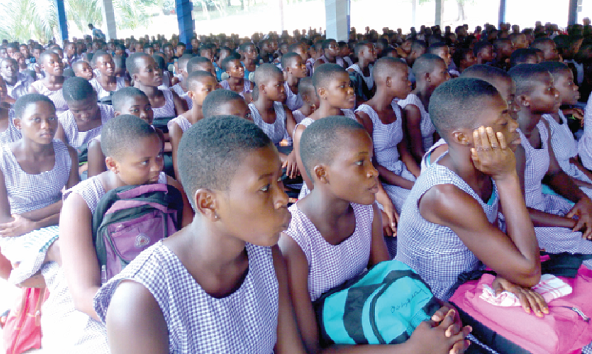 Some of the students at the launch.
30.5k Shares

All partners in education must show more commitment in the education enterprise in order to make it a cherished value, bequeathed to all generations.

The Chaplain of the Vakpo Senior High School (VASEC) in the North Dayi district, Reverend Patrick K. Dikro, who made the above statement, added that each partner must identify his or her role and play it effectively to deliver good results.

He made the call at the launch of the 50th anniversary of the school on the theme, “Developing Academic and Moral Potentials of the Youth Through Partnership: Challenges Ahead.”

He said past students of schools must take deep interest in their alma mater because of the investment made in them, and added that good examples must be set for young students to emulate to enable them to grow up to become worthy citizens.

In an address, the North Dayi District Chief Executive, Mr Kudjo Atta, said the government would offer the opportunity to parents to ensure that their children were enrolled in the Senior High Schools (SHSs).

He advised school administrations against the abuse of the Free Senior High School (SHS) policy, as well as the Computerised Schools Selection Placement System (CSSPS), adding that more teachers would be employed to shore up the numbers at post.

Mr Atta asked students to demonstrate a high sense of humility and discipline without any confrontation with school authorities and added that those qualities could guide them to pass out of school successfully.

He said a 12-unit classroom block would be constructed for the school, as well as the rehabilitation of the roads in the school to mark the 50th anniversary celebration.

The Paramount Chief of the Vakpo traditional area, Togbe Gbogbolulu V, said the school had attained its present status from a humble beginning through the selflessness of founding fathers and, therefore, called for a rekindling of the spirit to keep the school afloat.

In her address, the Headmistress of VASEC, Ms Charity Calai, commended those who supported the school in diverse ways since its establishment to date.

She said the school was presently challenged with a deteriorating boys dormitory, uncompleted state of various infrastructure, including the girls’ dormitory and classrooms, lack of a visual arts studio, lack of a reliable school bus and poor road network on campus.

Ms Calai commended the traditional council for its unflinching support to the school, adding, “We owe them tonnes of appreciation, hence we say the development of VASEC is really through partnership.”