Traders in some markets in Accra are appealing to city authorities to improve conditions there.

According to them, the recent rains had further worsened their plight.

When the reporter visited the CMB market in Accra last Tuesday, some traders had displayed food items and vegetables close to a pool of rain water. Others had placed their wares on containers on the bare ground next to choked open drains.

Some roads leading to the market were in a deplorable state.

A trader who gave her name as Yaa Maggie said although the conditions at the market were not the best, the traders had no option than to operate there, since there was no space at the other markets.

“People patronise our wares, because our prices are good, compared to the Makola Market. We have no where to sell that is why we operate here,” she explained.


The lorry terminals in the area were also affected badly anytime it rained. 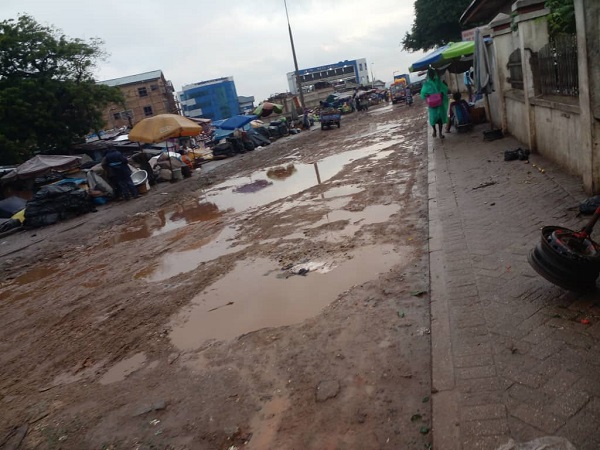 A road leading to the CMB Market

A driver, Yaw Osei, said the development made movement of persons and vehicles very difficult.

“This place is an eyesore anytime it rains. Some of the terminals are inundated by flood waters. The entire place becomes muddy. We are appealing to city authorities to come to our aid,” he said.
Another driver, Haruna Issah, shared similar sentiments.

“We pay tolls to the assembly, yet the conditions here remain the same. The assembly should redevelop the lorry terminal here because the situation is terrible when it rains,” he added.

The situation was not any different at the Agbogloshie Market.

Traders had displayed food items, vegetables, among others on dirty sacks next to choked drains and stagnant pools of rain water. Some cooked food vendors were operating under those unhygienic conditions, a situation which posed health risks to buyers.

A consumer, Nina Osei, said she patronised the market when she wanted to buy in bulk because the prices were very reasonable.

“I buy food stuffs and vegetables here because the prices are very good. It will be helpful if conditions are improved at the market,” she added.

Another consumer, Araba Fynn, expressed worry over the insanitary conditions.
“The conditions here are not good. It will be helpful if they are improved. Waste management is also vey bad here. I want that to be addressed”.

At the Kantamanto market, while some portions were characterised by stagnant pools of rain water, other portions were engulfed in mud.
The worried traders say they are hoping for quick intervention by the authorities.