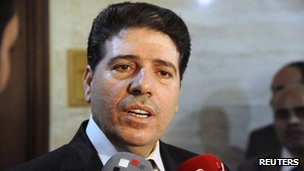 It is unclear whether the blast was a suicide bombing or a planted device.

State television carried a brief interview with Mr Halqi, saying that it was filmed after the attack.

He appears assured but somewhat shaken in the interview, in which he talks about a meeting he has just attended on the economy.

State TV said the blast happened at a busy intersection, near a public garden and a school. The upmarket neighbourhood is home to government buildings, the residences of several political figures and a military airport vital to the regime's defences.

"I was walking in the street when suddenly there was a very powerful explosion and I saw a car burning and people running," a witness told AFP.

An unnamed Syrian official said the explosion was caused by a bomb placed underneath a parked car in the area, the Associated Press news agency reported.

An earlier report said it had been a suicide attack.

Footage from the scene showed the charred remains of several vehicles, and a badly damaged bus. Debris and glass were strewn around a wide area, where onlookers had gathered.

A picture that activists said was of the site just after the attack showed a large plume of black smoke rising into the air near a road and a high-rise building.

Syrian forces and rebels have been fighting around Damascus for months but with neither side gaining the upper hand.

The attack is the latest bombing inside government-controlled areas of the capital.

So far there has been no claim of responsibility for Monday's attack. Similar bombings in the past have been linked to the jihadist al-Nusra Front, one of the most prominent rebel groups fighting the regime.

More than 70,000 people have been killed since fighting between Syrian forces and rebels erupted in March 2011.