'Growing evidence' of chemical weapons use in Syria - UK 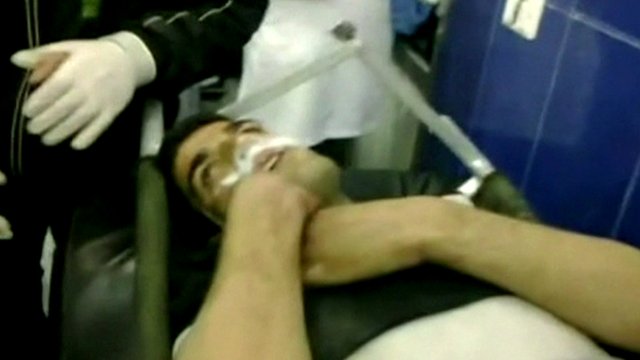 "It is extremely serious, this is a war crime," Mr Cameron told the BBC.

On Thursday, the White House said that US intelligence agencies believed "with varying degrees of confidence" that Syria had used the nerve agent sarin.

It said the gas had been deployed on a "small scale", but did not give details of where or when it had been used.

Mr Cameron said he agreed with the White House's warning that chemical weapons use would be a "red line" for possible intervention.

However, the US has said that this latest intelligence does not represent proof of chemical weapons use.

The White House's assessment was made in letters to lawmakers on Thursday signed by Miguel Rodriguez, White House director of the office of legislative affairs.

"Our intelligence community does assess, with varying degrees of confidence, that the Syrian regime has used chemical weapons on a small scale in Syria, specifically, the chemical agent sarin," one of the letters said.

But it added: "Given the stakes involved, and what we have learned from our own recent experiences, intelligence assessments alone are not sufficient - only credible and corroborated facts that provide us with some degree of certainty will guide our decision-making."

The phrase "varying degrees of confidence" is normally used to reflect differences in opinion within the intelligence community.

Speaking to reporters in Abu Dhabi on Thursday, US Defence Secretary Chuck Hagel said the use of sarin "violates every convention of warfare".

The UK Foreign Office echoed the US claims, saying it had "limited but persuasive information from various sources" of chemical weapons use in Syria.

It is understood that Britain obtained samples from inside Syria that have been tested by the Defence Science and Technology Laboratory at Porton Down, Wiltshire.

"Material from inside Syria tested positive for sarin," a Foreign Office spokesman said.

Syria is believed to possess large quantities of chemical weapons and there has been heightened concern among the international community in recent months about the safety of the stockpiles.

Although there have been numerous accusations, there has so far not been any confirmation that chemical weapons have been used during Syria's two-year-old conflict.

Anthony Loyd, a journalist for the Times newspaper, told the BBC about the aftermath of one suspected chemical weapons attack earlier this month in the northern city of Aleppo.

Video shown to him by doctors treating the affected patients "showed pretty clearly that they had been gassed", Mr Loyd says.

None of the patients appeared to have been hit by shrapnel but were frothing at the mouth, had dilated pupils and several other symptoms suggesting the use of chemical weapons, he added.

US President Barack Obama warned in December that Syrian President Bashar al-Assad would face "consequences" if he used such weapons.

The letters released on Thursday were sent to powerful US senators John McCain and Carl Levin.

In response, Senator McCain told reporters a "red line has been crossed" and recommended arming the opposition, a step the White House has been reluctant to take.

He also urged taking steps to ensure that Syria's chemical weapons did not fall into the wrong hands.

High-profile Democratic lawmakers also called for action to help secure Syria's stockpile of chemical arms and increase aid to the opposition, including the possible imposition of a no-fly zone.

White House officials said the US would consult with allies and seek more evidence to confirm their intelligence.

On Friday Israeli Deputy Foreign Minister Zev Elkin hinted that the US should consider military action to "take control" of Syria's chemical weapons.

"It is clear that if the United States wants to and the international community wants to, it could act - inter alia, militarily... And then all the fears... will not be relevant," Mr Elkin told Israeli radio, according to Reuters.

Syria's government and rebels have accused each other of using chemical weapons. A UN team is trying to enter Syria to investigate.

Sarin is a colourless and highly toxic nerve agent that can cause convulsions, paralysis and death within minutes if it is absorbed through inhalation, ingestion, or contact with skin or eyes.

According to the UN, at least 70,000 people have been killed in the Syrian conflict.