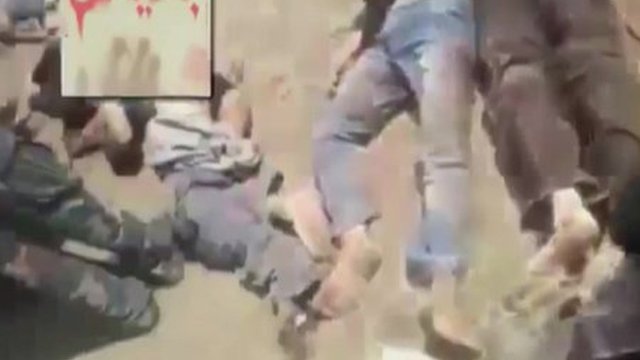 Hundreds of Syrians have fled coastal areas where activists accuse government forces of carrying out massacres in a campaign of sectarian cleansing.

Footage of mutilated and burned bodies, allegedly from the town of Baniyas, have been posted online.

Activists said at least 77 people - 20 from the same family - were killed, a day after 72 died in nearby al-Bayda.

The government said it had fought back "terrorist groups" and restored peace and security to the area.

Meanwhile, Israel has said its warplanes carried out an air strike on Syria targeting weapons heading to Lebanon's Hezbollah.

It is the second time this year that the Israelis have carried out such strikes.

Activists have reported two massacres in two days in the coastal area of central Syria.

They say the first was at the Sunni village of al-Bayda, which was overrun by regime forces on Thursday.

Activists groups have named 72 people they say were massacred in al-Bayda, some of them women and children.

Now they are reporting similar scenes at the Ras al-Nabaa quarter of the nearby coastal town of Baniyas, where they say at least 77 people died.

They have posted gruesome video clips to back up their claims.

Syrian TV reports on army operations along the coast, but claims they were to "drive back terrorists"

Foreign news organisations are severely restricted in Syria, so accounts and videos from activists are difficult to verify.

The BBC's Jim Muir in neighbouring Lebanon says the clips show the bloodied and tangled bodies of women and children, some of them mutilated or partly incinerated.

Hundreds of families are reported to have fled Baniyas southwards towards the city of Tartus, but activists say they have been blocked from taking shelter there.

The pro-government militia known as the shabbiha are widely reported to be involved in the operation.

Our correspondent says there is clearly a strong sectarian dimension to the reported actions.

Local activist and opposition groups have accused the government of launching a campaign of sectarian cleansing, he adds.

The operation is also being seen as a sign of President Bashar al-Assad's determination to fight on and consolidate his government's position.

It broadcast showed footage of him unveiling a statue honouring "martyred students", surrounded by bodyguards and crowds of people.

International efforts to tackle the violence have recently focused on the alleged use of chemical weapons by the regime.

US President Barack Obama has described such actions as a "red line", but he said on Friday that he did not envisage a situation where US troops would be sent to Syria.

The US has floated the idea in recent weeks of arming the rebel forces.

Analysts say the US and its allies are also discussing action including air strikes to enforce a no-fly zone, but Syria's ally Russia is strongly opposed to such measures.

In a statement, the US state department said it was "appalled" by the latest reported incidents.

"We strongly condemn atrocities against the civilian population and reinforce our solidarity with the Syrian people," it added.

"As the Assad regime's violence against innocent civilians escalates, we will not lose sight of the men, women, and children whose lives are being so brutally cut short.