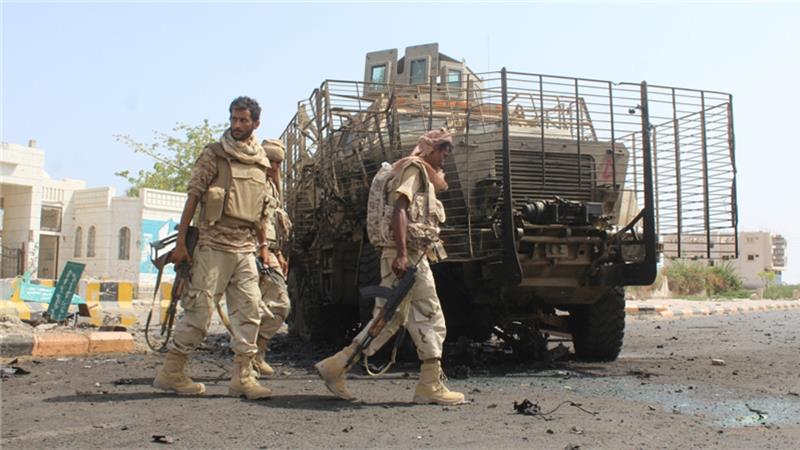 A security official told AFP news agency that the attacker drove his vehicle into a gathering of new recruits at the camp in northern Aden on Monday.

The blast killed 45 people and wounded 29 others, medical sources said from the three hospitals where victims were taken.

Security officials had said an earlier that the death toll was 11.

"It's a massacre. This is the highest death toll in any attack that happened in Aden before," Hakim Almasmari, editor-in-chief of Yemen Post newspaper, told Al Jazeera.

The port city, the temporary base of Yemen's Arab Gulf-backed government, has seen a wave of bombings and shootings targeting officials and security forces.

Later on Monday, the Islamic State of Iraq and the Levant (ISIL) group claimed responsibility for the attack.

Yemeni authorities have trained hundreds of soldiers in Aden over the past two months as part of operations to retake neighbouring southern provinces from fighters.

Troops retook other towns across Abyan but have been met by fierce resistance in key a al-Qaeda stronghold, Al-Mahfid, a town which lies further east, security sources said.

The fighters are still present in areas surrounding the recaptured towns and control large parts of the neighbouring Shabwa province, the sources say.

The Arab coalition which backs the Yemeni government against Iran-backed rebels has also been providing troops with air cover throughout the war against the fighters.

The coalition intervened in Yemen in March last year and has helped government troops push the rebels out of Aden and four other southern provinces.

But authorities have been struggling to secure these provinces.

More than 6,600 people, mostly civilians, have been killed in Yemen since March 2015 and more than 80 percent of the population has been left in need of humanitarian aid, according to the UN.