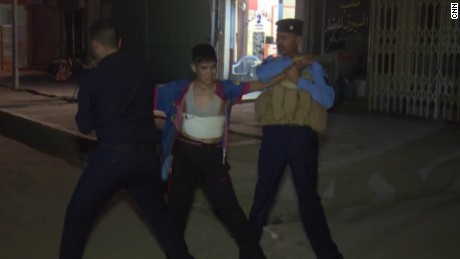 A boy stands shaking in the street. Fear etched across his face. Two men flank him on either side as a third rips through the boy's Barcelona football shirt to reveal what appears to be an explosive belt.

The Iraqi security officers grip the boy tightly. A small slip of the hand and the boy could reach the trigger and all four would die.

This was the dramatic moment Iraqi police stopped Hussein, a 15-year-old suspected in a suicide bombing attempt for ISIS in the Iraqi city of Kirkuk on Sunday.

"Let me go," the boy whimpers. The officer shouts back: "We will take you down and go to God together."

Footage appears to show officers restrain the visibly upset boy while they carefully but expertly cut the belt from the youth's torso. Once the belt has been removed, the boy is scooped up into custody.

"Don't be afraid," the officer can be heard saying. Hussein begins to cry. Then scream. "Sorry uncle. I'm sorry."

This is a teenager, with no parents, he tells authorities later, looking for somewhere to belong. Instead he is taken in by ISIS and brainwashed into becoming another child suicide bomber. Militants force-fed him with their extreme ideologies before sending him out into the world to kill for them. And authorities say the practice is becoming increasingly more prevalent.

Hussein isn't a lone wolf. Authorities tell CNN Hussein is originally from Mosul, ISIS' most significant stronghold outside Syria. They say the teen arrived in Kirkuk a week ago and he wasn't alone. Kurdish officials believe he is part of a sleeper cell sent by ISIS to the province to commit acts of terror.

And while he didn't succeed, they say his friend, believed to be part of the same sleeper cell, detonated a device the day before killing a policeman. Another football shirt-wearing teenage boy brainwashed by ISIS recruiters. Additionally, Najmaldin Karim, the governor of Kirkuk Governorate, told CNN that three more would-be child bombers remain unaccounted for.

"(Hussain) was captured before he reached his destination, which was a Shia mosque," added Karim. "The security guards noticed there was something wrong, especially that there was another suicide attack a bit earlier, and they captured him."

Karim said the terrorist organization "trained and brainwashed" the boy. "They tell them if they do this, they will go to heaven and have a good time and get everything that they ever wanted," he said.

The arrest in Kirkuk comes a day after a child bomber is believed to have targeted a Kurdish wedding in Turkey, killing at least 54 people. More than 20 of the victims were children under 14, a Turkish official said Monday.

'Cubs of the caliphate'

As ISIS grows desperate, Kurdish authorities say the group is growing reliant on its child recruits.

ISIS has a history of exploiting children through propaganda, but more recently it has used them as weapons on the front lines and to target civilians.

The terrorist group maintains an army of child soldiers, stolen from their families and indoctrinated to their cause. These so-called cubs of the caliphate are inducted into ISIS' campaign of violence through myriad grim training practices, with children as young as 8 reconditioned to follow the terror group's ideology, according to UN reports.

"We have had reports of children, especially children that are mentally challenged, who have been used as suicide bombers, most probably without them even understanding what has happened or what they have to expect," Renate Winter, an expert with the UN Committee on the Rights of the Child, told CNN in 2015.

The group is believed to use threats, intimidation and an unrelenting endurance training to break down the children. In some instances, boys are forced to witness ISIS militants shoot fellow recruits if they stop participating in drills.

The jihadi movement is also believed to have seized schools to re-educate and radicalize children to follow the group's extreme interpretation of Islam.

Human Rights Watch has said ISIS and other extremist groups "have specifically recruited children through free schooling campaigns that include weapons training and have given them dangerous tasks, including suicide bombing missions."

These terror tactics involving children have remained a top concern among lawmakers and human rights organizations. The first open source database documenting ISIS child propaganda was launched this year after 13 months of study.

Researchers estimated 1,500 child soldiers are training and fighting in the terror group's ranks.

"They are not just being used to shock people in execution videos. They are being used for their operational value as well," Charlie Winter, the study's co-author, told CNN in February. "This is something that sadly we have to expect to increase and accelerate as the situation becomes more precarious for ISIS in the years to come."

ISIS is not the only terror group known to use child soldiers. Reports have emerged of children exploited by Boko Haram in Nigeria and Al-Shabaab in Somalia.