At least 50 dead in attack on wedding party in Turkey 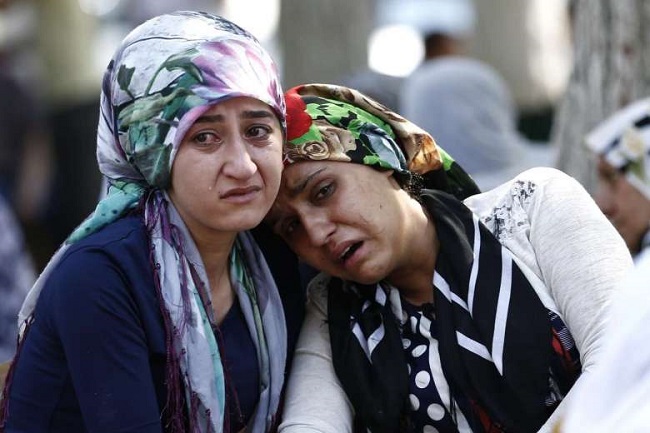 At least 50 people have been killed and 94 more wounded in an explosion at a wedding ceremony in Turkey's southeastern province of Gaziantep, near the Syria border.

The blast, which occurred at around 11pm local time on Saturday in the Akdere neighbourhood of Sahin Bey district, was a "terror attack", according to Ali Yerlikaya, the governor of Gaziantep.

He said ambulances were dispatched to the scene, and dead and wounded people were taken to hospitals.

Mehmet Simsek, Turkey's deputy prime minister, told NTV that the explosion appeared to have been caused by a suicide bomber.

Turkish President Recep Tayyip Erdogan said "Daesh is the likely perpetrator of the attack", using the Arabic name for the Islamic State of Iraq and Levant (ISIL) group.

"Our country and our nation have again only one message to those who attack us: You will not succeed!" he said.

Separately, Samil Tayyar, a member of parliament from the governing Justice and Development Party, pointed the finger at ISIL, also known as ISIS, in remarks on Twitter.

A major city lying just 60km north of the Syrian border, Gaziantep has become a hub for Syrians fleeing the civil war in their country.

But as well as refugees and opposition activists, there have long been fears it is home to a significant presence of ISIL sympathisers.

Sahin Bey district is said to have a large number of Kurdish residents and reports indicate the wedding too had a strong Kurdish presence, fuelling speculation of ISIL involvement.

The pro-Kurdish Peoples' Democratic Party (HDP) said its members had been present at the wedding, which was also attended by many women and children.

"This is the first of its kind in Turkey. And we know very well from the Afghanistan experience to what extent attacks on weddings can distrupt order in a society," he said.

"I think ISIL is trying to exacerbate already tense ethnic and sectarian cleavages in the southeast of Turkey."

Southeastern Turkey has been hit by several deadly blasts over the past year, linked either to ISIL or the Kurdistan Workers' Party (PKK), an armed group outlawed in Turkey.

Three suspected ISIL suicide bombers killed 44 people at Istanbul's main airport, Ataturk, in July, the deadliest in a string of attacks in Turkey this year.

Almost 40 people were killed in a suicide bomb attack in Ankara in March that was claimed by a Kurdish separatist group.

Violence flared up in the largely Kurdish southeast in the past week, with bomb attacks leaving 10 people dead in separate attacks, mostly police and soldiers, in an escalation that officials blamed on the PKK.

A group of Turkish soldiers last month attempted to overthrow the government, commandeering tanks, helicopters and warplanes in an attempted coup that killed 240 people.

The government has accused followers of Fethullah Gulen, a US-based exiled Turkish religious leader, of being behind the plot, a charge rejected by them.

Hakan Yavuz, a professor in the department of political science at the University of Utah, says Turkey is more vulnerable now because of the purge in security forces after July's developments.

"There is also a rapprochement between Russia, Iran and Turkey over their Syria policies. Ankara is much more moderate now in allowing Syrian President Bashar al-Assad to stay in government, at least during the transition period.

"ISIL poses a greater threat to Turkey as a result of this shift in the country's foreign policy."