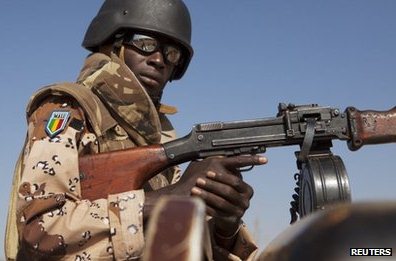 Election officials abducted by gunmen in northern Mali a week before presidential elections have been freed, local officials say.

The workers were seized on Saturday in the Tessalit area while handing out voter identification cards, they said.

Tuareg rebels were suspected of having abducted the officials.

Mali recently lifted a state of emergency in place since January, when France intervened to help drive out Islamists occupying the north.

The governor of northern Kidal province, Adama Kamissoko, told the Associated Press news agency the workers had been kidnapped by fighters from a Tuareg rebel group.

They were picked up on Sunday by French forces and driven to a military camp a short distance from Tessalit, he said.

French troops, deployed in Mali earlier this year, are in the area with Chadian forces, who are part of the UN stabilisation force, Minusma.

It is not clear, however, how many were taken - reports vary from two to six people.

In Tessalit, about 200km (125 miles) north of the main provincial town of Kidal, officials said the town's deputy mayor was one of them.

They were said to be unharmed.

The abduction was ordered by a member of the Tuareg National Movement for the Liberation of Azawad (MNLA), who was arrested and was now being questioned in Tessalit, an unnamed official in Kidal told AFP news agency.

Tensions have risen in the Kidal region of northern Mali ahead of the 28 July presidential vote, aimed at restoring civilian authority over the country.

Tuareg separatists took part in the 2012 rebellion that led to Islamist militants seizing northern Mali. The Islamists soon took charge of the region.

French and West African forces intervened in January to force the militants out of the desert towns but security remains a concern.

Tuareg rebels held the town of Kidal until a June deal with the government.

Under the deal, fighters from the MNLA are allowed to remain in the town but they are supposed to disarm.

Kidal is the only town in Mali where the Tuaregs form a majority.