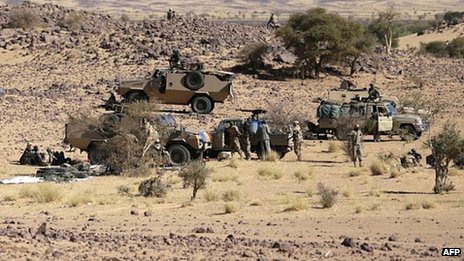 Gunmen in northern Mali have abducted two election officials a week before presidential elections - the first since the military coup in 2012.

The two men were seized at a checkpoint between the town of Tessalit and a local airport, local officials said.

No group has so far claimed responsibility for the attack.

Early this month, Mali lifted a state of emergency in place since January, when France intervened to help drive out Islamists occupying the north.

The two election officials, one of whom is believed to be a deputy mayor of the town of Kidal, were among six Malians who had been due to distribute voters' cards in Tessalit.

They were seized after their car stopped at the checkpoint.

Ministry of territorial affairs spokesman Gamer Dicko said it was the first time Malian election officials had been targeted - and no request for a ransom payment had been received.

The BBC's Alex Duval Smith in Bamako says that the elections officials may be viewed by their captors as representatives of the Malian government and its close links with France.

Chadian troops serving with Minusma are deployed in Tessalit, alongside French troops from Operation Serval.

The ethnic clashes in Kidal involve Tuaregs and black civilians.

Tuareg rebels held the town until a June deal with the government.

Under the deal, fighters from the National Movement for the Liberation of Azawad (MNLA) are allowed to remain in the town but they are supposed to disarm.

Kidal is the only town in Mali where the Tuaregs form a majority.

The Tuaregs have launched several rebellions since Mali's independence in 1960, accusing the government in Bamako of ignoring the northern areas where they live.

Many Malians blame Tuareg separatists for starting the 2012 rebellion which led Islamists to seize northern areas.

French and West African forces intervened in January to force the Islamist militant groups out of the desert towns but security remains a concern.

The elections are aimed at restoring civilian authority over the country.